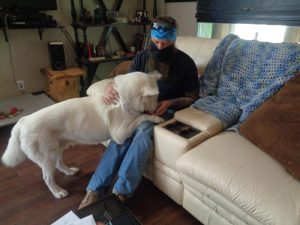 In the service dog world, Odin, a 5-year-old Siberian Husky, is an outlier.

Perceptive, intelligent, social and the foundation of Above the Clouds Siberian Service Dogs, Odin is trained to quash the effects of post-traumatic stress disorder.

“We had no idea he was going to be a good service dog,” said Barrett T. Leary-Stensgaard who, with her husband, Tim Stensgaard, breeds and trains the dogs in Woodland Park. “Our trainers were just flabbergasted because Siberians have a bad reputation.”

Most service dogs, she added, are Labradors, German shepherds or Golden retrievers. “We got passionate about Siberians when we found that Odin has superior genetics – his line goes back 400 years to Siberia,” she said. “They are working dogs.”

The couple opened the business with Siberian rescue dogs but changed focus when results were disappointing. “We decided to start breeding, to take control of the genetics and the temperament,” she said.

Yet Odin is the star Siberian for Stensgaard, a U.S. Army Special Forces Green Beret, who served in six combat tours of duty. Only recently did he acknowledge his PTSD. “I just ignored it as a possibility,” he said. “Even now I’m reluctant to talk about my PTSD — most vets are; it takes a lot to come to grips with that.”

When Stensgaard starts feeling anxious, Odin goes to work. “He’ll start getting on me, distracting me,” Stensgaard said. “He reacts to anxiety before I pick it up.”

Dogs that graduate from Above the Clouds Siberian Service Dogs help those with PTSD, mobility/stability issues, blindness, seizures or autism, for instance. “We have different training methods for different issues,” Leary-Stensgaard.

For people with mobility issues in addition to those with special needs such as autism, the couple relies on Cindy Pixler of Grand Junction, a home health-care nurse.

Each dog is certified as a Canine Good Citizen by Lisa Lima, a dog trainer and animal-assisted therapist and owner of My Life Unleashed in Woodland Park, or her business partner Eric Rice. “I can’t certify my own dogs,” Leary-Stensgaard said.

Once purchased and trained, the Siberians head out to destinations around the nation. For instance, at a year old, Raven is trained and ready to be picked up by the new owner, Nahkee Augusta, who is driving in from Wisconsin to pick up the dog.

“The research is that dogs bond better when they go home in a year,” she said. “I’m pretty good at matching the right dog with the right person.”