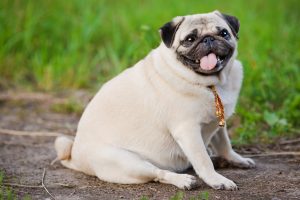 The disruption of normal joint mechanics may lead to or result from injury to the various components of a joint. Frequently, this injury results in osteoarthritis (OA),1 which often leads to physical incapacity, pain and reduced quality of life for the affected pet. OA is the most common form of arthritis and is recognized in humans and in all veterinary species. It is often a slowly progressive condition characterized by two main pathologic processes: degeneration of articular cartilage with a loss of both proteoglycan and collagen, and proliferation of new bone. In addition, there is a variable, low-grade inflammatory response within the synovial membrane.

In North America, OA prevalence is reported to range from 20% in dogs older than 1 year up to 80% in dogs over age 8.3 The objectives of OA treatment are multifaceted: reduce pain and discomfort, decrease clinical signs, slow disease progression, promote repair of damaged tissue and improve quality of life.

It has been suggested that the best results in dogs with chronic pain due to OA result from a combination of anti-inflammatory and analgesic medications, disease-modifying OA agents, specific nutrients, nutraceuticals, weight reduction, exercise programs, physical therapy and therapeutic diets. Applying an individualized combination of these management options to each patient will enhance quality of life, which is the ultimate goal of therapy.

It is well recognized that obesity is epidemic in companion animals. In 2018, the Association for Pet Obesity Prevention estimated that 56% of dogs in the United States were overweight or obese.5 In addition, a long-term study has documented that the prevalence of OA is greater in overweight/obese dogs compared with ideal weight dogs (83% vs. 50%).4,6 Given these data, it is reasonable to assume that a significant portion of arthritic dogs will be overweight/obese and vice versa. Managing these comorbid conditions presents a variety of challenges.

As disease entities, OA and obesity present diagnostic challenges for very different reasons. Clinical signs of OA may not be obvious on examination, particularly early in the disease process. Although signs of pets being overweight or obese are readily apparent, these signs are often overlooked or dismissed as inconsequential. Diagnosis of OA generally requires a combination of history, physical examination findings and radiographic evidence of degenerative joint disease. Although this seems straightforward, historical clues, which are vital to creating an index of suspicion, may be elusive and clinical signs are often subtle and not evident on routine veterinary examination. Owners may attribute many signs of OA to normal aging and therefore fail to report them unless prompted (see Stages of osteoarthritis). Owners of dogs at risk for obesity and OA should be educated on the importance of lifelong weight management. The incidence and severity of OA secondary to canine hip dysplasia can be influenced significantly by environmental factors such as nutrition and lifestyle.

Clinical signs of OA include difficulty rising from rest, stiffness and lameness. A thorough disease-specific history may reveal evidence of subtle changes early in the course of OA, such as reluctance to walk, run, climb stairs, jump or play. Signs may be as inconspicuous as lagging behind on walks. Veterinary teams must listen to owners when they are describing that their dog is reluctant to walk on tile or hardwood floors, or that their pet no longer wants to go for car rides—something that was once a favorite activity.

Owners are often unaware of the correlation between behavior changes and OA. Yelping or whimpering, and even personality changes such as withdrawal or aggressive behavior may be indicative of the chronic pain of OA. Additionally, the veterinary team may uncover subtle signs caused by OA pain that the owner did not notice, such as longer nails (indicating that the dog is not walking and so nails are not being worn down by hard surfaces) or abnormal fur patterns over joints (indicating the dog has been licking the area). Consistent use of an owner questionnaire may facilitate early detection of OA. Dietary factors can potentially modify some of the underlying processes involved in OA, including modulation of the inflammatory response, provision of nutrients for cartilage repair and protection against oxidative damage. Where effective, dietary management may help reduce or eliminate the need for conventional drugs, some of which are associated with adverse effects.

As the building blocks of proteins, amino acids play a role in the makeup of tissues and organs throughout the body. Methionine is a unique amino acid that produces several molecules that are essential for proper cell function. Methionine, which contains sulfur, can produce other sulfur-containing molecules in the joint and is involved in protein production. Manganese is an essential nutrient involved in many chemical processes in the body, including bone formation. Manganese plays a role in the health and maintenance of bone and cartilage in joints. In addition, manganese supports collagen formation for joint strength. Methionine and manganese are building blocks for cartilage in joints.

Carnitine is an amino acid that enables the body to turn fat into energy. Carnitine aids in muscle maintenance and transports long-chain fatty acids and their derivatives into the mitochondria of cells. By strengthening skeletal muscle and turning fat into energy, the severity of OA may be lessened.

Hyaluronic acid is a principal component of synovial fluid and works in the joint to maintain joint viscosity, aid in joint lubrication and help with shock absorption. Additionally, vitamins C and E are antioxidants that neutralizefree radicals to maximize mobility. N-acetyl-D-glucosamine “shortcuts” the glycosaminoglycan pathway to maintain healthy joint structure and function.

In normal canine cartilage, there is a balance between synthesis and degradation of cartilage matrix. In arthritic joints, damage to chondrocytes incites a viscous cycle that culminates in cartilage destruction, inflammation and pain. The mechanisms responsible for the demonstrated clinical benefits of omega-3 fatty acids include controlling inflammation and reducing the expression and activity of cartilage-degrading enzymes.

Cartilage degradation starts with loss of cartilage aggrecan followed by loss of cartilage collagens, resulting in the inability to resist compressive forces during joint movement. EPA significantly decreases the loss of aggrecan in canine cartilage by inhibiting the upregulation of aggrecanases by blocking the signal at the level of messenger RNA.4

Shellfish supplements have been used to manage arthritis in humans and, in recent years, interest has focused on the potential benefits of a nutritional supplement prepared from the New Zealand green-lipped mussel (GLM), Perna canaliculus.11 GLM is known to contain anti-inflammatory components and other nutrients that benefit joint health. Heat processing of GLM has been shown to destroy its activity. Therefore, the processing of whole GLM and incorporation of the GLM product into food products requires special care and processing techniques to avoid destroying any efficacy of the final product.

GLM has been shown to contain a unique omega-3 fatty acid, eicosatetraenoic acid, which appears to act as a dual inhibitor of arachidonic acid oxygenation by both the cyclooxygenase and lipoxygenase pathways.12 GLM is a rich source of nutrients, including glycosaminoglycans (e.g. chondroitin sulfates), vitamins, minerals and omega-3 series polyunsaturated fatty acids.

Nutrition, and specific nutrients, provide an effective and safe way to manage OA in dogs. Foods with high levels of omage-3 fatty acids have the dual benefit of controlling inflammation and pain while slowing disease progression by decreasing cartilage degradation.

Successful treatment and prevention of obesity and OA require a comprehensive approach that includes preventive measures and a multimodal treatment program. Documenting the presence of comorbid conditions is critical.

Clinical signs of OA are often not obvious on examination, particularly early in the disease process. Early diagnosis of OA facilitates early intervention, which will likely improve long-term outcome. Nutritional management should be part of the multimodal approach in dogs with joint disease. Mobility is powerful and allows humans and dogs to live healthily and happily in body and mind. Joint health is fundamental to moving in comfort and should be addressed with every dog that comes into the hospital.