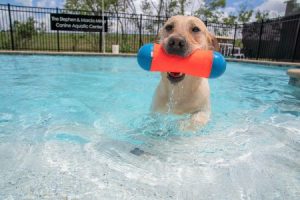 Southeastern Guide Dogs has a sterling reputation for breeding, raising and training extraordinary guide dogs for sight-impaired individuals, service dogs for veterans with disabilities and companion dogs for children with significant life challenges.

Towards that end, the nonprofit organization is always adding programs that help its dogs and recipients have a longer and happier relationship together.

One of these is its two-year-old Canine Fitness Program, which includes the recently opened Stephen and Marcia Miner Canine Aquatic Center.

“Our program started in July 2018 and is comprised of four staff members and several volunteers,” said Jessica D’Ambrosio, its manager and a certified canine rehabilitation technician. “Its primary focus is to extend the working career of our dogs by improving their physical and mental fitness.”

The program has several components. “The first is physiotherapy, which involves agility equipment, stairs, ramps and inflatable props that move, provide different textures and are used for several physical exercises,” D’Ambrosio said. “The exercises we use focus on specific muscle groups, including (a dog’s) core, back legs, front legs and overall body. “It’s a great way for our dogs to expend energy and increase fitness.”

There’s a land treadmill for cardio that looks just like the one used by humans, and a waist-high hydrotherapy tank, where the dogs “that may be struggling with a specific health issue” can walk under water. It’s also an alternative to the land treadmill for these future superheroes.

D’Ambrosio is especially proud of what she called Southeastern Guide Dogs’ “incredible” aquatic pool, which has been in use since February.

“A few of our dogs don’t like the water, but most dive right in and thoroughly enjoy exercising in the pool by doing laps with us or swimming against their own resistance, using something called a “Super Swim,” D’Ambrosio said. “This device resembles a fishing pole, and it connects to a dog’s life vest, allowing [the dog] to swim away from the pole against its own resistance to build muscle and increase its cardiovascular health.”

After they’re returned by their puppy raisers and before starting with their trainers, all Southeastern dogs go through the Canine Fitness Program for one hour a day for four weeks. When they’re not working the program, they go back to their kennels to participate in a variety of enrichment activities. Each kennel houses two or three dogs.

“I love seeing how each dog progresses in confidence and physical fitness form the time they start to the time they leave us,” D’Ambrosio said. The idea is “if our dogs are healthier, they can possibly work longer and continue with their handlers. Fitness and health make their working lives easier.”

Southeastern Guide Dogs’ guide, service or companion dogs retire around age 10 or 11, and they’re adopted by the person they served, their puppy raisers or private individuals.