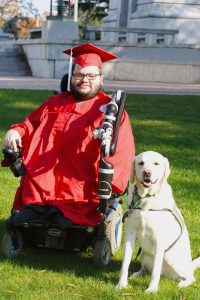 Since 2020 has a recurring theme of being a never-ending dumpster fire for everyone, I suppose this bit of news was inevitable. A week ago, my family and I said goodbye to my service dog, Pandy, after a solid decade with her.

What started as a series of hip pains turned out to be a rampant bleeding tumor. She contracted a fast and paralyzing illness, but thankfully didn’t have to suffer long. My dad told me how peacefully she went at the veterinary office, and I had the opportunity to say goodbye beforehand.

I don’t want to use this column to dwell on the circumstances of Pandy’s passing. Instead, I want to reflect on the time I had with her, and how she helped me grow as a person.  I had my reservations about getting a service dog. My parents thought it’d be a good idea, but I was a stubborn teenager who thought it was too much responsibility. Not only that, I also dreaded the attention that would inevitably come with it, and the cringeworthy statements that people would say to me.

“You’re in love!”  “That’s a good companion you’ve got there! Is she your special friend?”

These kinds of anticipated comments made me hesitant about acquiring a service dog back when my parents first pitched the idea. I already received plenty of questions about my chair and my disability, but a service dog would eliminate any sense of normalcy in my life.

Still, my parents were adamant that I could benefit from having a canine companion in college, and we started discussing it when I was still in high school. It took some convincing, and I remained apprehensive about it throughout the process. Even when I was paired with Pandy, I still had my doubts. My parents reasoned that if I was ever alone on campus or needed help, they’d feel safer if I had a trained service dog with me. Stubborn as I was, I agreed to go through with it and see what would happen.

We worked with the organization Canine Assistants, a nonprofit organization based outside Atlanta, Georgia. The dogs there are trained from birth, and once they are about 18 months old, they start getting paired with people. Matches are based on personalities, compatibility, and how well the person and the dog work with each other.

Yes, it sounds exactly like an online dating site. The organizers even compared acquiring a service dog to getting married and having kids simultaneously. None of this was helping me combat the stereotype about my dog being my closest friend or significant other. Hence, the sense of dread surrounding all of this continued to persist.

Yet here I am, 10 years later, and I wouldn’t trade our relationship for anything. Yes, Pandy was a ton of responsibility. And yes, I received numerous cringeworthy statements whenever I was with her in public. Looking after her was exhausting at times. But no matter what, she was always there for me. She challenged me in ways I can’t even put into words, and she helped mold me into a stronger and more empathetic human being.

When we got the news of her illness, I knew that the hardest part would be letting my community know. As I’ve been thinking about all of our times together, particularly at NC State University, where I went to college, I knew many of my friends considered her family as well. Since her passing, old colleagues and professors have sent me messages about how much they adored her.

Things for her haven’t been the same since I graduated from college and started working remotely. Those years were some of the best for both of us.

I know she’ll be sincerely missed. I’m also thankful that these past few months at home inadvertently gave me more time to spend with her. Our final memories include quiet evenings in our front yard, with her at my side while I listened to music.

Ok, that’s enough sentimentality on my end for at least a year. I’ll end this piece with my go-to service dog joke.

“Yeah … I’m blind and in a power wheelchair.”