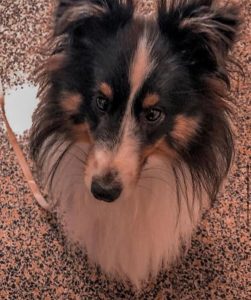 While Chip the Sheltie patiently waits for students to return to Verellen Elementary School, students at Garber High School have embarked on a mission to bring the Shetland Sheepdog some co-workers in the district.

An after-school program there is now competing for a $25,000 grant that would bring therapy dogs to each of the four schools in the Essexville-Hampton Public Schools district.

Ethan Shannon and Lori Flippin are lead mentors for FRC Team 5216, or The E-Ville Empire, at Garber High. The team is part of the FIRST Robotics Competition, a national network of after-school programs that compete in robotics competitions.

While robotics competitions often focus on STEM topics – or science, technology, engineering, and mathematics – FIRST Robotics is different. A community service aspect is built into the organization’s mission.

“The world needs good human beings, too.” And dogs.

While community service projects in each of the past several years have focused on physical safety, the most recent robotics team wanted to switch things up and focus on mental health instead. A fundraising campaign would go on to raise almost $5,000 to purchase Chip the Sheltie, a therapy dog that has been dispatched to Verellen Elementary.

Now Garber High as well as Cramer Junior High and Bush Elementary schools may get therapy dogs of their own, too.

The E-Ville Empire team’s therapy dog project has been selected as one of 200 projects nationwide, vying for the chance to win one of 40 $25,000 grants from State Farm Insurance. Shannon says that winning the grant would save five to six

All they need is the community’s votes.

“As of right now, our program is placed 15 out of 200 entries. Winning is not a pipe dream,” Shannon says.

“We can do it if the community comes out and supports us.”