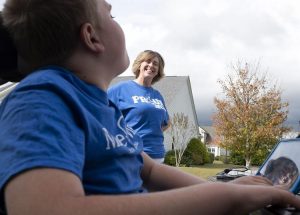 After more than one misdiagnosis and struggles that at times seemed insurmountable, help is on the way to Berkshire Forest’s Holman family.

Peppa, a 4-month-old chocolate lab, is in training to become a service dog for 12-year-old Nicholas, who is just about 100% disabled because of a calcium channel disorder called CACNA1A.

Perhaps by chance, perhaps by Providence, a representative from Hands of Hope told Nicholas’ mother, Chrissy, that the family might be eligible to get such a blessing from the Make-A-Wish Foundation.

The foundation grants the wishes of critically ill children, one every 34 minutes.

“A wish can be that spark that helps these children believe that anything is possible and gives them the strength to fight harder against their illnesses,” the foundation’s website says.

After checking all the right boxes, the family was approved, and that pro-Peppa decision was celebrated with a Nov. 1 parade in Berkshire Forest where the family lives.

Holman says the Berkshire Forest community has been wonderful to her family, and especially to Nicholas.

“In New York, if an ambulance came to the house, nobody asked if we needed help. Here, everyone is so supportive and even the children are so nice to Nicholas.”

The dog, scheduled to be ready to join the family in a couple of months, will be a companion for Nicholas and will help him stay calm.

But the most important thing Peppa will do, Holman says, is alert the family as much as 24 hours in advance that Nicholas is going to have a seizure.

The Hands of Hope representative approached Chrissy at MUSC where Nicholas was flown as a result of an incident that caused him to code twice.

“It was as if he had a full stroke,” his mother says.

The Hands of Hope woman not only told the distraught Mom that the Make A Wish Foundation, with which Hands of Hope works, may provide a dog, the woman also offered the lifetime palliative care services of Hands of Hope.

Those services include everything from needed medical equipment to emotional support, both of which Chrissy Holman says have been life-changing.

Nicholas, who can communicate through his electronic device, is unable to speak except for a very few words such as Mama and Daddy.

He cannot walk or dress himself. Nicholas cannot feed himself or use the bathroom himself.

Nicholas attends sixth grade at Ocean Bay Middle School where an aide helps him through his day.

And of all the issues she deals with as his primary caretaker, Chrissy Holman says the seizures, which can happen anytime without warning, are the most challenging.

Before having a seizure, Nicholas emits a scent the dog will recognize.

When they met Peppa, she and several other dogs were taken to a park where seizure samples of several people were hidden. Each dog successfully sniffed out its person’s sample.

“By alerting us that Nicolas may have a seizure, we can be prepared,” Chrissy Holman says. “We can have his equipment right there, we can make sure he’s lying down.”

Nichola’s seizes might be followed by a hemiplegic migraine.

The first one was in 2015, a couple years before the family moved to Berkshire.

Unfortunately, the problem was misdiagnosed as a virus on his brain.

Family friend Michele Caietta said another challenge is the need for services such as physical and occupational therapy “which are minimal here.”

Caietta is an almost-constant presence in the Holman home when she’s not working as a physician’s assistant at Grand Strand Medical Center.

She moved across the street from the family, which includes Holman’s husband Richard Csukas and Nicholas’ sister Samantha, from New York where she was already a family friend.

She won’t be socialized to be around other people or even other dogs, and will be a working dog, intent only making life easier for the family.

Caietta says she knows her friend doesn’t complain about her responsibility with Nicholas, but Caietta sees what she goes through and knows how difficult it sometimes is.

“Yes,” Holman admits, “There are days when I get angry and frustrated and it weighs me down, but I do what I can do.

With Peppa’s arrival on the horizon, the only other immediate issue the family is dealing with is the HOA.

The family would like to extend the HOA’s fence guidelines on their property so Peppa will have an area to run in.

They’d also like to see a wheelchair lift at the pool. That would accommodate not just Nicholas, but three other children in the community who are confined to wheelchairs.

Holman says her Christian faith helps her deal with Nicholas’ circumstances, and says most days, that’s what gets her though them.

“Peppa will give me peace of mind when I’m alone with Nicolas,” Chrissy Holman says.

“There will be other eyes on him, even if it’s a dog’s eyes.”