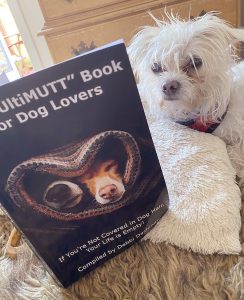 “If You’re Not Covered in Dog Hair, Your Life Is Empty!”

So reads the subtitle for “The UltiMUTT” Book for Dog Lovers,” a collection of 12 “tails” about dogs and their owners, published by Dare to Dream Knockout Publishing for $30 in color and $7 in black and white.

Hal Price and Leana Orsua, both of Carpinteria, can relate.

Two of their stories are included in the book “Rescue Reilly: The COVID-19  Super Dog” by Mr. Price and “Roxy to the Rescue: In Memory of Denise Cohen” by Ms. Orsua.

The author of 11 international bestselling books as well as storybooks for children, Mr. Price tells his story from the creative perspective of Rescue Reilly, who he adopted in March from The Little Dog House in Goleta.

“I have Rescue Reilly share what life was like before I took him home — how he was found, along with four other newborns, in a Burrito Grande cardboard box next to a Taco Bell dumpster in Camarillo, taken to Ventura County Animal Services and then to Goleta,” Mr. Price told the News-Press.

“In my story, I have Reilly listening to other dogs at the shelter, making them comfortable, soothing them. He was a healing dog because he had a heart murmur.”

Rescue Reilly “writes” in the book that his heart was tested at the animal shelter, where a heart murmur was detected: “Each day as a new animal was admitted, I welcomed them quietly with my heart as it murmured loving messages to them. I always tried to calm them down when they first arrived at our noisy and sometimes chaotic location.

“By day, they were loved and cared for by the staff, but at night when the staff was gone and my new friends were all alone in their cages, I had my heart murmur to soothe them and bring them peace.”

During this time, the puppy, a mix of Maltese/terrier/poodle, was named Justin but as Reilly “writes” in the book, “As Hal and Maggie were leaving the shelter, I heard them discussing names for me. As they passed the auto repair store next door to The Little Dog House, Hal looked up and saw the name O’Reilly Auto Parts and said, ‘This dog is NOT A JUSTIN! Let’s name this little guy something a little more unique . . . How about RESCUE REILLY? Because today, we have all been RESCUED in some profound way.”

Not only has the dog provided a great deal of comfort for Mr. Price during the pandemic, the father of three grown children and three grandchildren has made him famous with the puppy’s own Facebook page and website.

Leana Orsua delivers a powerful story about the quiet comfort of her dog Roxy after the tragic loss of her dear friend, Denise Cohen, during a mass shooting in 2017 in Las Vegas at the Route 91 Harvest country music festival.

‘Denise was one of 58 people killed. We had been friends since 2008. We met at the Canary Hotel during one of the happy hours, and we just clicked,” said Ms. Orsua by phone.

“My dog Roxy, a mix of Chihuahua and dachshund, was 6 years old at the time. She seemed to have a sixth sense about the tragedy. It was so powerful, so moving the way she connected with me. She would stare into my eyes, giving me a sense of comfort and making me feel at peace. She helped me work through the sadness I felt. She had the innate ability to be right there in the moment.”

In the book, Ms. Orsua writes, “Her support timing became impeccable. She learned the cues, always squeezing up to me at just the right moment when she sensed my anxiety and grief. Her eyes had become so good at giving me a signal of compassion. And sometimes she would come up and lick my tears.”

A former television news reporter, Ms. Orsua, who is in charge of membership management at the Santa Barbara Museum of Natural History, has another dog named Gigi. Both were adopted from DAWG (Dog Adoption & Welfare Group) in Goleta. (The nonprofit merged with another organization this year, and it is now Santa Ynez Valley Humane Society/DAWG.)

“Both humans and dogs are social creatures, so the bond between Roxy, Gigi and I evolved into a naturally symbiotic relationship,” she writes. “Dogs are generally friendly, trusting and always eager to please. Although I don’t have kids, I discovered a deeply maternal bond with my dogs …

“I’m especially grateful for the unwavering love and emotional support of my Roxy who penetrated through my pain and helped to heal the emotional scars.”