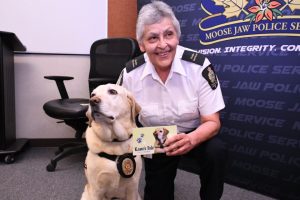 “Kane’s Tale” is about Kane, a yellow Labrador retriever that operates with Moose Jaw Victims Services.

One of the Moose Jaw Police Service’s four-legged officers is the subject of a new book that talks about how the canine can provide comfort during stressful situations.

“Kane’s Tale” is about Kane, a yellow Labrador retriever that operates with Moose Jaw Victims Services and is accredited to work in any justice-related building such as courthouses or police headquarters. A canine-assisted intervention dog, Kane has been with the Moose Jaw Police Service (MJPS) since 2015. He was chosen for his role due to his personality traits such as calm temperament, stable demeanour and willingness to engage with people of all ages.

Written by his handler, Donna Blondeau, “Kane’s Tale” is an eight-page flip-book that informs adults and children that Kane can help them if they need assistance, can provide them with comfort and support, can help them feel safe, and is a trustworthy companion.

MJPS hosted a book launch on June 30 with Kane, Blondeau, representatives from both the public and Catholic school divisions, and other dignitaries in attendance. The plan is to distribute the book for free to families with children in pre-kindergarten, kindergarten and grades 1 and 2 this fall if schools return.

Kane has worked hard these past five years to support the community, Blondeau said. He has brought joy and hope to people young and old, especially those who have been traumatized.

“One of the other things I find extremely important is he is available for us here at the police service,” she continued, “and the days when things maybe aren’t going so well, and you just need to give Kane a pet. He just seems to be there. So we do our daily and weekly rounds if we can and ensure people get to meet him.”

While working in Victim Services before Kane arrived, what became apparent to Blondeau was that she was encountering many children and adults who had been hurt by events. She thought it would be great to have something to support them, so she approached the school divisions and other officers about producing a book that was small enough for kids and could have food smeared on it.

However, the book had to have a message; while Kane was well-trained and good looking, Blondeau didn’t want a simple picture book even if that would have brought happiness to kids. Instead, she wanted something with a message that children could take home and enjoy with their families.

“I still believe that parents (and grandparents) … (still) sit down and read storybooks to children,” she said. “I think it’s important to have that.”

It can sometimes be frightening to come to the police station since uniforms can be intimidating, Blondeau continued. She hoped that if the public knew about Kane, it could make a difference when they come in after a devastating event.

Kane “has had a definite impact” on the thousands of people he’s met, whether in this community, in other communities such as Humboldt, and even at 15 Wing Air Base, she pointed out. While this book was important to her, Blondeau credited other members of the MJPS for helping put together the book.

“This was my passion. It was easy to do,” she added. “I’ve already written another book on Kane. And I will continue to do so.”

Lori Meyer, learning superintendent with Prairie South School Division, praised the timing of the book and how necessary it is. She pointed out the student services department works with counsellors and psychologists about how to handle traumatized students.

While the target of this book is children, it can also help adults, said Lois Saunders, co-ordinator of student supports with Holy Trinity Roman Catholic School Division. Children can sometimes have interesting insights about a book, which can help adults with their healing.

“(This is) another piece of trauma-informed work we can bring into our schools,” Saunders added, “and really support those kids and families that we’re concerned about.”