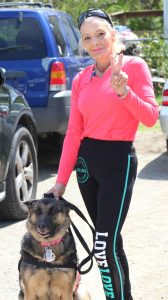 Jenn Benitez of Rad­cliff was 14-years-old and living in her home state of Wisconsin when she witnessed a young girl on a bicycle get struck by a car. According to Benitez, the child survived, but the situation could have been much worse if she wasn’t there.

“People just froze in fear,” she said. “Nobody would act so I went running and stopped the car and got them to back up. After that it was instinct, administrating first aid and calling 911. I then started pointing at people saying ‘you need to do this, you need to do that.’”

For Benitez, this moment was the spark that ignited her passion for helping those in dire situ­ations. This passion has extended throughout many state lines, from Austin, Texas, to Mobile, Alabama. Now, Benitez is helping residents of Hardin County amid the COVID-19 pandemic.

Benitez is the founder of Hardin County KY #Stand2gether, a Face­book group serving as a community network for Hardin County residents to help each other by donating needed items such as food, medical supplies and sanitation items.

Since its creation on March 20, more than 1,000 Facebook users have joined the group.

Benitez and other mod­erators serve as group liaisons, picking up supplies from those who wish to donate and dropping them off to those in need. When someone in the group expresses a need for certain items, a “mayday” is issued in the group, requesting donations.

Le Ann Crigler, a fell­ow moderator for the group, said she met Ben­i­tez through the group and instantly was impressed by her desire to proactively respond to the needs of local residents.

“I was impressed by Jenn’s intro to the group and about coming together as a community with the pandemic,” she said. “I knew I wanted to join the group because, like a lot of people, I am feeling unsure and lost during this time and was looking for a way to communicate with others and to be a part of something greater that is out there.”

The Facebook group also serves as a resource for updates on COVID-19 and regional responses to the virus. In addition, group members regularly share positive content to help alleviate anxiety.

“You should never deprive somebody of hope,” Benitez said. “That may be all they have left.”

During many deliveries and pickups, Benitez poses for a photo with those do­nating or receiving items while putting up two fingers – an allusion to the group’s name.

With years of experience working in emergency medicine, Benitez said she takes several pre­­cautions to ensure she can safely pick up and deliver donations. These precautions include sanitizing items, keeping a safe distance from donation re­cip­ients and sometimes repackaging donations when necessary.

Moving to the area seven years ago, Benitez served for 14 years as a paramedic while living in Alabama and Texas. Throughout her time living in these states, Benitez endured and helped others amid several natural and man-made disasters.

While living in Mobile, Benitez was dis­placed by Hurricane Ka­trina in 2005. Though she had to live in a tent in her front yard after the devastation, Benitez said she acquired a donated refrigerator truck to disperse food to those in the area.

Benitez also assisted those reeling from the destruction caused by Hurricane Ivan in 2004 and Hurricane Ike in 2008 while living in Mobile.

Benitez said her efforts assisting in disaster relief has prepared her for help­ing those affected by COVID-19 locally.

“In Katrina, we didn’t have time for red tape and B.S.,” she said. “We needed help immediately and that’s what people need right now. They need hope and they need help.”

In addition, Benitez said she served on an un­der­water search and re­cov­ery team after the 1993 Big Bayou Canot rail accident in Mobile, which killed 47 people after a train derailed off the CSX Transportation Big Bayou Canot Bridge. She said she also helped in recovery efforts after the Deepwater Horizon oil spill in 2010, in which an estimated 210 million gallons of oil from oil and gas company BP was spilled into the Gulf of Mexico.

While living in Aus­tin, Benitez served as a rescuer after the 1997 Jarrell tornado, one of the most destructive F5 tornadoes ever recorded. The tornado resulted in the deaths of 27 people in Jarrell, Texas.

“As much as I’ve been a victim from disasters and catastrophes, I never let it stop me from what everybody should be doing, which is being there for each other,” she said.

Before her days in Har­­din County were con­sumed with deliveries, Ben­itez served as a restaurant cook and stayed busy with her small business specializing in canine obe­dience and service dog train­ing. She was laid off amid restaurant dine-in closures and her dog training client base has shrunk amid the outbreak.

Throughout the past two decades, Benitez said she has worked with various animal rescue organizations and shelters throughout the country and even worked with an American-funded animal sanctuary in the Baja peninsula of Mexico.

Through Karma’s Dreams Dog Training Acad­emy, Benitez visits dog owners at their homes to provide services. She said her ultimate goal is to one day acquire a building where she can operate a canine daycare and be­hav­ioral management facility.

“I’d like to take in so many rescues a month and train them for the chance of a better home and a better life,” she said.

Crigler said through and through, Benitez puts others first.

“She’s definitely a giver,” she said. “I tell her on a daily basis to slow down and to take care of herself. When someone needs help in the community, she’s usually the first to respond, making deliveries late into the night.”