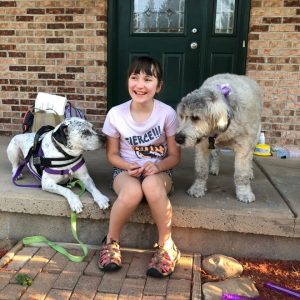 The federal Department of Justice and the Gates Chili Central School District have settled litigation over a student’s use of a service dog while on campus — a fight that began in 2012 and prompted a federal lawsuit against the school district in 2015.

In that lawsuit, federal Department of Justice officials argued that the school district had violated the Americans with Disabilities Act, or ADA, by requiring that the student’s family provide a handler for the dog. School officials did allow the dog on campus, but contended that their responsibilities ended there.

The long-fought case appeared to be headed for trial this year, before a January hearing before U.S. District Judge Charles Siragusa, at which each side staked out its positions. At that hearing, Siragusa urged the two sides to work toward a resolution.

“If we can’t resolve this, we’re ordering a trial,” Siragusa said, according to transcripts. “I think if you both step back — and I don’t mean to put words in your mouth — but I think you both feel this is a case that can be resolved in a fair fashion.”

In 2012, Devyn Pereira, then a kindergarten student, attended school with her guide dog Hannah, a white Bouvier des Flandres that has since died. Her family maintained that Devyn, a student with special needs, could handle Hannah; school officials said she could not do so all day.

Devyn has Angelman syndrome, a neuro-genetic disorder that causes developmental delay, lack of speech, seizures and problems with walking and balance. Hannah helped her with balance — standing and sitting —  and also could detect life-threatening seizures.

Court records show that school officials argued that Devyn could not control the dog at all times, while her family and Justice Department lawyers said she could. Records show that Hannah was particularly attuned to Devyn, often recognizing immediately when she planned to stand or move from her seat.

Hannah sometimes prepared for class to end moments before it did so, records show.

“She was a very well-trained service dog and a unique dog,” Department of Justice attorney Megan Elizabeth Schuller said at a hearing.

Under the settlement, the school district agreed to provide some assistance in cases with a service dog, such as helping with water and tethering and untethering. The District also is paying $42,000 to the family for out-of-pocket expenses and emotional distress payments.

“The ADA guarantees individuals with disabilities equal access and equal opportunity in all areas of community life, including in schools,” James P. Kennedy, Jr., U.S. Attorney for the Western District of New York, said in a statement. “This agreement is an important step forward in ensuring that students with disabilities can fully participate at school and in all educational programs.”

In a statement Thursday, the Gates Chili Central School District said: “The resolution of the case confirms the district’s position that there was no discrimination. The settlement agreement between the district and the Department of Justice reaffirms that the district is not, and will not be, responsible for the care or supervision of a service animal.”

Devyn’s mother, Heather Pereira, and Devyn have moved to the Hilton Central School District. In a 2019 Democrat and Chronicle story, Heather Pereira said Hilton school officials have been accommodating and helped her daughter “reach goals we didn’t know were possible before now.”

The Democrat and Chroniclereported in the story that, at that time, the Gates Chili Central School District’s legal costs had topped $600,000. The family initially sought a $25,000 reimbursement in the lawsuit.

“Invoices obtained via a Freedom of Information Law request show the district’s lawyers, largely with Harris Beach PLLC in Rochester, billed at least $609,000 in connection with the matter between October 2013 and December 2018,” the Democrat and Chronicle reported. “About 85 percent of that was paid by the district’s insurer, but out-of-pocket costs for Gates Chili taxpayers so far exceed $90,000 in a legal war sparked by a request from the child’s parent for a $25,000 reimbursement.”Court records show that there were earlier possible proposed resolutions from attorneys that did not meet the approval of the School Board.