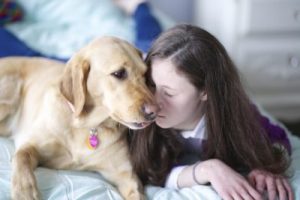 Over the last year-and-a-half Kim Rosenbaum has witnessed firsthand the positive impacts that her family’s four-year-old Yellow Lab-Golden Retriever mix Autumn has had on her household.

But Autumn isn’t really a pet. She was trained and adopted by Rosenbaum from BluePath Service Dogs for her 15-year-old daughter Lindsay, the oldest of her four children. Lindsay is autistic, has been mostly non-verbal and like many others on the spectrum is prone to wandering and elopement.

However, Autumn keeps Lindsay anchored, whether it’s in a department store, a restaurant or anywhere else the family may go.

“It’s difficult for us to do activities as a family, and when I took Lindsay out, we were always worried about her safety because she tends to wander off, and yet having Autumn has allowed us to do more activities as a family,” said Rosenbaum, a Purchase resident. “And Autumn has really become Lindsay’s best friend. She’s been a wonderful addition to our family, particularly during this pandemic. Not only did she help Lindsay, but at some point, almost everyone in the family.”

BluePath Service Dogs founder Michelle Briar said the dogs are particularly effective for children who are smaller. The dog can more block or help guide a child to where he or she is supposed to go or to stay in place.

“Our dogs and kids are connected by a specially-designed tether system, and when the child goes to bolt, the dog anchors the child, and each dog has its own anchoring position, that they effectively stop that child from getting into a dangerous situation,” Briar said.

But a specially-trained service dog that can offer crucial safety, companionship and a chance at independence for autistic children and young adults takes resources. The Hopewell Junction-based BluePath Service Dogs, which was established in 2016 and has paired 16 people with a canine service companion, breeds and trains its dogs, which costs about $40,000 each, Briar said. Another 40 dogs are currently being trained, she said.

BluePath charges a relatively nominal fee of $1,200 for a family who is adopting a dog for a family member, she said. The rest of the cost must be raised through donations and fundraising events.

That’s why for the fourth consecutive year, BluePath was scheduled to hold its annual walkathon at FDR State Park in Yorktown on Saturday morning, Oct. 3. Similar to hundreds of other events, though, the COVID-19 pandemic forced its cancellation and turned it into a virtual experience.

There will be a 15- to 20-minute online warmup and introduction and then participants can head out into their neighborhoods or wherever they feel most comfortable to complete one of three distances ranging from a half-mile to three miles, Briar said.

“We encourage everyone to go out and walk, and our theme is separately but together, and while at the event there’s varying distances that people walk at. It’ll be the same thing as the live, physical event,” she said.

Rosenbaum said since adopting Autumn in April 2019, the dog has helped Lindsay in multiple ways. Not only does she keep her daughter safe but also provides an important connection with other people. When she is out with Lindsay and Autumn, Rosenbaum said people seem to gravitate to them, ask questions and look to pet the dog. She said it helps her daughter with socialization and even verbalization.

“It’s been incredible,” said Rosenbaum, who will be participating in the virtual walkathon with her family. “We’re so thankful for BluePath and we like to support them any way we can.”