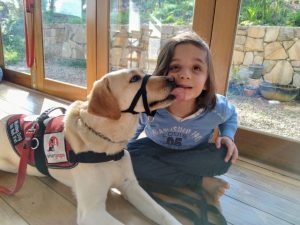 Melanie Maclean said she has lodged a complaint with the commission after Leura House and 3 Sisters Motel declined to take her booking because of her son’s assistance dog. Both providers said they were unaware of legislative requirements at the time.

On June 30, Ms Maclean tried to make bookings for the July school holidays at 3 Sisters Motel and Leura House. When both were refused, she couldn’t face the prospect of a third rejection and decided to stay at home.

She said their labrador Shiloh is a certified assistance dog who has been hugely beneficial for her seven-year-old son Gus, who is on the autism spectrum.

“He hasn’t had a full meltdown in two years. He self-regulates with her,” Ms Maclean said.

“There is no way that I would go anywhere without her.”

Ms Maclean said life was challenging enough for her son and precluding him from having a holiday with his assistive technology – equivalent to a hearing aid or wheelchair – was hurtful.

Certified assistance dogs are required by law to be clean and groomed, have had extensive training, including toilet training, and also have documentation, she said.

“I want them to accept animals and acknowledge that,” Ms Maclean said.

3 Sisters Motel manager Jason Dorrington said until Ms Maclean had sent him a link to an article explaining that service animals must be accepted at any property, he was unaware of the law.

“I read it and said I would take the booking and thanked her for sending the email to me. I had no idea service animals had to be accepted,” he said.

Garry Maxfield from Leura House described it as a “misunderstanding”.

“Along with other accommodation providers we weren’t aware of the rules, the requirements and the certification,” he said.

“In the future it’s not a problem.”

“Council is liaising with local accommodation providers about federal legislation that requires that assistance dogs be welcomed at their establishments,” a Blue Mountains Council spokeswoman said.

The office of Gareth Ward, the State Minister for Disability Services, Families and Communities declined to comment on federal legislation.

The Gazette contacted the Australian Human Rights Commission, but a spokesperson said it was not their policy to comment on complaints.