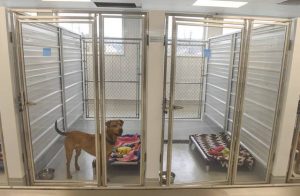 Puppy dog tails wagged, cats meowed and the staff and volunteers of Animal Protectors of Allegheny Valley rejoiced on Thursday afternoon for the opening of its new $1.8 million animal shelter along Church Street in New Kensington.

In addition to medical and shelter provisions for animals, there is now space for animal training, adoption meet-and-greets, community outreach and more.

Previously, Animal Protectors operated in a small building along New Kensington’s Linden Avenue that for years was ill-equipped with proper ventilation or adequate space to care for the animals.

Efforts by the shelter’s board incoming president, Phyllis Framel, and others turned into an almost eight-year odyssey to find a new larger home.

They were turned away in Allegheny Township and Lower Burrell to locate the shelter there.

Then, in 2016, they secured the former school at 730 Church St. in the city. Shelter officials fielded the typical and atypical fundraising and construction challenges including stoppages caused by the covid-19 pandemic.

“We did it,” Framel said on Thursday. “A lot of people worked really hard, and now we have this wonderful facility for the community and surrounding area.

“We’ve been in existence for 54 years and hope to serve for another 54 years with expanded services and a healthier atmosphere for the animals,” she said.

There was little fanfare with Thursday’s ribbon cutting ceremony at the entrance of the new shelter as board members, staff, volunteers and the media turned their attention to the dogs and cats as they arrived one-by-one entering the shelter.

Kevin, Joker and Harley — all mixed breeds — were among the dogs brought in on leashes to excited shelter staff and volunteers who called their names, greeting each animal.

Predictably, the cats held on to their aloof demeanor at they arrived in carriers. They were whisked to their new home with side litter box rooms next to their cages and a bank of windows allowing sunlight to flood the room.

The facility will house the shelter’s current crop of about 16 cats and eight dogs.

The new shelter, which is about 14,000 square feet, is almost five times the size of the old shelter.

The new site also features modern kennels with glass doors, multiple medical rooms with holding areas and sophisticated ventilation to constantly refresh the air and also contain circulation in the medical rooms to prevent the spread of viruses.

“When I saw the sign outside of this new shelter today, I almost cried,” said Dr. Betsy Kennon, who volunteers professional veterinary services to the shelter.

“This is our forever home and we can do so much for these critters now,” she said.

Kennon marveled at the individual medical rooms replete with a sink and stainless steel examination tables and kennels.

“It will be nice to no longer have to examine an animal on the floor or on the counter,” she said.

The project was made possible by some hefty, six-figure bequests from area residents, along with other donations from individuals and foundation grants, Framel said.

Some of the large bequests came from volunteers, while other large individual donations were a complete surprise, she said.

“Animals are a huge part of people’s lives especially now during the pandemic,” Framel said. “People realize there is a need for stray, abused and abandoned animals to find homes and it is a mission that is dear to the hearts of some residents.”

While animals were moving into the new shelter Thursday, it will take days to completely settle in, Framel said.

Although the facility is closed to walk-in traffic, animal adoptions are ongoing but are only offered by advance appointments.

For more information, visit Animal Protectors’ website and call their offices at 724-339-7388.