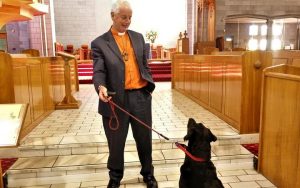 Pet owners will lead, carry or coax their treasured moggies, pups, lambs and birds to Nelson Cathedral on Sunday for a service arranged especially to bless them.

The annual event has in the past attracted a menagerie of all-sorts, including rabbits, goats, cats, dogs, kunekune piglets, and once even a box of worms.

Dean Mike Hawke said it might sound like a recipe for chaos, but all the animals he had blessed in the past had been remarkably well behaved. He said the service normally coincided with St Francis Day – the service recognising the patron saint of animals, but it had become too noisy.

“This year we have some folk who are of the Order of St Francis, and they want to have a special service to renew their vows, so we thought we’ll have a separate service for the animals because it’s so rowdy and irreverent and fun so we’re having it a week earlier.”

He said it was just not possible to have that much barking and meowing over what was a very sacred service.

“I mean, it’s the noise level – one dog starts barking and they bark … and then the cats – they don’t know what to do. It’s fascinating.”

Dean Hawke said the service required all the animals to come up to the altar, near the choir which sang hymns in context with the occasion. The animals and the owners were then blessed.

“That’s the high point. We ask each animal’s name, say a prayer and give thanks to God for creation.

“This year it’s particularly exciting because the preacher is Andrew Newton, the farm manager of Pepin Island.”

Newton was in the news recently as the farmer who lost a sheep during an attack by a run-away husky dog.

“So I’m intrigued as to how Andrew will either dodge that or say, ‘well, in God’s creation there are all sorts of conflicts’.”

Dean Hawke hoped the husky in question, Banshee, might turn up to the service.

“Wouldn’t that be great! Andrew has a few of his own sheepdogs coming, but the other thing is, there will be some sheep there … peace and tranquillity in creation eh?”

He said that was in itself a bit of a sermon.

“They are the hunted, and they are our friends and I guess in the end it’s how we treat each other and how we treat animals.

“This is a worship service at a cathedral where we’re open about giving thanks to God’s goodness and his part in creation, and we’re the recipients of that wonderful creation.

“We have the privilege of having pets who always greet us in the morning and at night, as opposed to the grumpy husband, or wife or kids or teenagers.”

Dean Hawke said cleaning up afterwards was a shared effort.

“We all have a crack at it but actually we’ve been very fortunate in the past. There’s not too much debris but dog-owners are well-trained, and the sheep? Well, that could be a problem but they’re only little pebbles and besides, there’s not a lot of carpet in the cathedral – it’s a hard stone floor so we’re fortunate.”

He said it was nothing in comparison to what donkeys could leave behind, as witnessed at Easter services he had attended elsewhere.

The one-hour service will start at 10am on Sunday, and will have a mixture of hymns, prayers and readings mainly involving the animal kingdom.