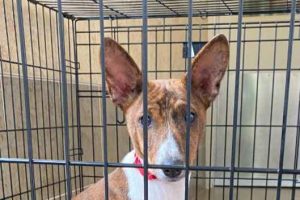 Animal Allies is in need of help and generous donations from the community after responding to a hoarding situation involving 24 dogs.

There’s a GoFundMe page for the dogs, where Animal Allies explains the situation. The 24 Basenji mix dogs were discovered in a Animal Allies service area.

Animal Allies says the dogs come from a challenging situation. They lived together with limited human contact. Animal Allies said each dog will need its own individual care plan. Some are already available for adoption and others will be with the animal shelter for an extended amount of time.

Animal Allies is asking for donations to provide care for the dogs. They said some of them are in better physical and mental health than others. Six of the dogs will need significant medical treatment beyond what they can provide at the shelter.

Thankfully, Animal Allies was able to find a placement for them with rescue groups that specialize in the type of care they need.

The medical team is assessing the needs of the remaining 18 dogs. Some of them need hernia surgery and dental work. All of the dogs will be given medical exams, vaccinations and will be spayed or neutered.

Animal Allies said taking in a large group of special needs dogs like this is a huge strain on shelter resources. They said the adoption fees will only cover a fraction of the real cost of caring for the dogs. They estimate the cost will be between $350 and $1500 per dog. That’s why Animal Allies is asking the community to step in and help.