Adding A Dog To The Family 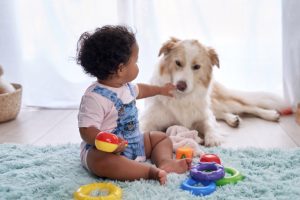 Tails, slobbery kisses and furry cuddles are some of the joys associated with pet ownership. The healthful benefits of owning a pet have been well documented, and a growing body of research shows the psychological impact pets can have on families.

A recent study by Johns Hopkins Medicine found that being around dogs at an early age can lessen one’s chances of developing schizophrenia. Interestingly, cat ownership did not have the same effects. There seems to be something special about the connection humans have with dogs.

Universities, large companies and even airports are introducing dog-friendly environments for people to cuddle with dogs to help reduce stress and anxiety. An examination of 22 studies about pet companionship, which was published in the International Journal of Environmental Research and Public Health in 2017, found that pet ownership can benefit social, cognitive, education and social development.

Families may consider adopting a pet to gain some of these benefits. To better understand the effects of pet ownership, we talked to Dr. Sabrina E.B. Schuck, executive director of the UCI Child Development Center and assistant professor in residence in the Department of Pediatrics at the UCI School of Medicine. (This interview has been edited for length and clarity.)

OCF: What are your thoughts about the recent Johns Hopkins study that found early exposure to dogs may decrease one’s chances of developing schizophrenia later in life?

Schuck: The findings are certainly interesting and warrant further investigation into the role of household pet dogs in childhood on mental health. It is a sound study, but as the authors note, there were a number of limitations, and as such we need to approach a discussion of the results with caution.

While I am an avid dog fan, we certainly cannot take away from this research (or my own) that we should bring a dog into our homes when we raise kids. Caring for animals is obviously an immense responsibility, and the decision to bring a dog, or any pet, into the home is complex.

OCF: What are some of the most important health benefits of having a pet dog during childhood?

Schuck: Research in human-animal interaction has increased in the past 10 years, but there still exists very few well-controlled, randomized trials examining the immediate benefits of pet ownership and fewer still longitudinal studies examining this question.

There is increasing evidence that families who have a pet dog are more likely to regularly walk their pet, and we speculate that this behavior may reduce the likelihood of developing childhood obesity. Colleagues have also found that pet ownership during childhood may decrease anxiety.

OCF: How do exposure and interaction with dogs impact mental health through childhood and beyond?

Schuck: Decreased physiological stress and improved perceptions of stress levels have been found in children and young adults (and adults) who participate in animal-assisted interventions and activities (AAI/AAA).

In our work, we also found improved self-perceptions, improved attention and decreased conflict in childrenwith mental health challenges who participated in AAI with therapy dogs. The finding held six weeks after the sessions with the dogs — and this finding was the same for children who had a pet and who did not have a pet.

OCF: How and why does pet ownership help reduce anxiety and stress?

Investigators are actively working to better understand the mechanisms by which physiological and perceived stress are reduced. Some speculate that the attachment one develops to their pet acts in much the same way health attachment to our loved ones does. Others suggest the tactile sensations stimulated during pet interaction release hormones similar to those released in social relationships, particularly oxytocin. Still others posit that interaction with an animal elicits emotional and cognitive arousal, thereby calming overactivity or stress.

There is no “one size fits all” for human-animal interaction. And we are all working hard to figure out for whom pet ownership is most beneficial.