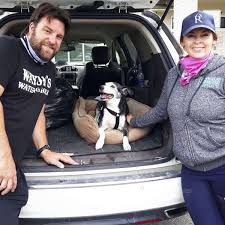 Thanks to one California animal shelter, this senior dog was able to find his next forever home.

Humboldt County Animal Shelter in McKinleyville sprung into action this week when a local resident discovered an abandoned dog trapped inside a vehicle.

The woman contacted the Humboldt County Sheriff’s Office, who were able to figure out that the dog’s name was Banks and that his owner had recently passed away, the office shared on Facebook.

The HCSO also determined that Banks had been left in the vehicle for several days.

The animal shelter took over from there and was able to locate Banks’ “next of kin” who shared that the black-and-white pooch was about 15 years old.

“They requested that we find him a nice home to spend his golden years here in Humboldt,” the sheriff’s office wrote. “This is where the story becomes the best outcome ever!”

Shelter assistant Jeanette Duncan recalled an approved applicant that previously visited the shelter in search of a “nice senior dog.”

Duncan then put in a call to the applicant, Meredith Maier, the co-owner of a local eatery, Six Rivers Brewery.

“It was love at first sight,” the sheriff’s office wrote of Maier and Banks’ meeting.

“We are so very proud and touched to do the work that we do here at the shelter providing a safe landing spot for so many pets in need and either getting them back to their owners or on to their new lives,” Duncan wrote.

Banks is seen with a big smile in the photo as he sits in the back of a car in his bed.

“What a great story. Thank you to the Sheriff’s Office and Shelter for saving him,” one user wrote.

“Poor guy but now he is getting the love he had been and is safe, warm and fed! Enjoy the rest of your years with your new human Banks!” another added.

One person replied, ” I am sooooo happy Banks found a good forever home.”