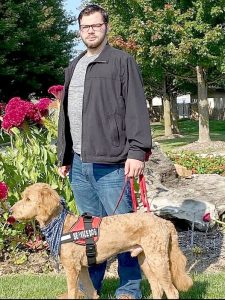 A new Pineville nonprofit that helps people with disabilities obtain service dogs has made its first match.

The Saber Life Foundation was started in March by Danea Key and her husband Joel. They provide people with trained service dogs, paying 51 percent of the cost, with the client paying the other 49 percent. Service dogs can be very expensive, with their training costing up to $25,000 to $30,000 and the dogs themselves costing $3,000 to $5,000.

Danea said they have received several grants and had several fundraisers, as well as going to events where they sell dog treats. Clients fill out an application and then go on a waiting list, she said. The trainer they use is Tim Franks of On Command Canine Training Academy in Joplin. Caden Ogden, 19, of Carl Junction, was certified with his service dog, Thorn, on Oct. 2, making him the nonprofit’s first match.

Caden’s mother, Rona Ogden, said before they got Thorn, “(Caden) didn’t really go out in public much. He very much stayed in his room and didn’t come out. He didn’t have really a life at all. Severe anxiety. PTSD. No friends. When he did have to go out in public it was very, very hard for him just to walk into a store. Just to go into a store and pay for a gallon of milk was a big feat for him, especially if the store was busy. If it wasn’t for him living at home, he probably would have just gone without.”

The family has had Thorn for two months.

“He’s a completely different kid,” Rona said. “He’s able to go into a store; he’s even went into a store by himself. He’s started applying for jobs on his own. He’s started talking to people. I’m excited by the idea he’s going to make friends soon. His personality is starting to change for the better. It’s amazing to watch him blossom every day. It’s incredible to see what he can do right now. And I have very high hopes for where we’re going to go with this. For the first time, I see him living on his own and being safe. I see him having friends and having a life just like you and me. My only regret is we didn’t find Thorn sooner in Caden’s life.

She went on, “He didn’t believe he had any rights before, and now he’s starting to stand up for his rights and advocate for himself. He’s confident and he’s starting to see himself as an adult. He wants to go vote this year. He was afraid to go vote before because there were too many people. Now he’s excited to go vote.

“He’s starting to talk about a future for himself and, before, he couldn’t see a future for himself. I’ve always been proud of my son, but the obstacles he’s been overcoming in a short time — I wish every person with a disability could have a dog like Thorn. It would change their life.”

Rona added she has worked in the disability community off and on for the past 23 years, and Thorn has made a greater difference than any medication or therapy she has seen.

She said before the family knew about the Saber Life Foundation, they got a service dog and started training it for Caden, but the dog had an accident and died.

“Without the Saber Foundation, we never would have had the ability to get a service dog again. Because we put everything into (the first dog). They gave us hope. It just happened so quick and it was amazing to watch it. Without them, we could have never got (Thorn) because service dogs are very expensive.”

Danea said the idea for the nonprofit started after the Key family got their daughter, Gracie, her first service dog, Saber. Gracie suffered from anxiety and other issues and knew she needed a service dog for a few years before she was able to get one. Gracie is now a sophomore at McDonald County High School, and she has just been certified as a team with her service dog, Amos.

“We got started with Saber, but now she has Amos; that’s a whole other story,” Danea said. “Saber was not able to certify because there were some things he was panicky about like wheelchairs and crutches. The trainer didn’t feel really good about that. About a month ago she got Amos and the trainer got Saber a different job. We felt he still needed to be able to work because he is a working dog, so he is working with another man.”

Since Gracie got a service dog, she is a “totally different child than she ever was,” Danea said.

“She can walk through a store by herself without being close to Mom and Dad. She has so much more confidence in herself. She’s gone off over half of her medications. Amos picked up where Saber left off. She’s able to focus more. The biggest thing is her confidence. Not having to worry about her anxiety being what it was. She’s a lot more outgoing and making friends and keeping friends,” she said.

Danea added when the family got close to having Saber’s training paid off, they decided to start the nonprofit because they knew other people who needed service dogs.

“It’s been a lot of fun,” she said. “We’ve met a lot of people. Being a nonprofit has opened up a lot of doors to a lot of opportunities to a lot more than we were able to do before. We have an amazing board. They want to help everyone they can. It’s a vision coming to life that’s reality now. It’s been quite amazing, that’s for sure.”

She added, “These dogs aren’t a want; they’re a need. It’s educating and advocating about these dogs. The transition that Gracie has had in the past year speaks for itself.”