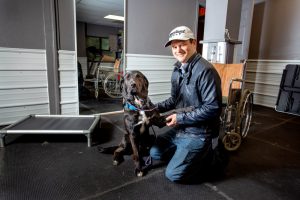 K9s for Camo Inc. is in the business of giving rescue dogs a new purpose in life.

Dozens of canines had been headed toward euthanasia before John Lopez claims them for training at his Rogersville nonprofit. The mission is to turn them into service dogs for military veterans.

“Getting started, I thought it was going to be all about the veterans,” says Lopez, a former U.S. Army specialist, “but starting to work with some of these rescue dogs, they are so thankful.”

Lopez started the organization in 2013 – while running his core business, Howliday Inn Pet Resort in Rogersville. The for-profit work in dog training, boarding and grooming led to his nonprofit idea.

He’s since sold Howliday Inn, striking a deal last year with longtime K9s for Camo volunteers, Brandon and Summer Gerhardt. The husband and wife bought the pet resort for an undisclosed price. Lopez had owned it since 2013.

“When I did own it, it just worked hand-in-hand because I could have the dogs boarding there at no cost and do everything to help the nonprofit out with the business,” Lopez says.

The K9s for Camo training varies based on challenges facing the veterans, with the dogs instructed to provide diabetic and narcolepsy alerts, as well as help with issues involving mobility, post-traumatic stress disorder and traumatic brain injury.

Training camp
A connection remains between K9s for Camo and Howliday Inn.

“We always have at least one to two. Sometimes we have five or six,” Summer Gerhardt says of Lopez’s canines in training.

Every rescue dog is first evaluated at Howliday Inn, Lopez says, with seven to 10 brought in every week. The dogs are rescued by numerous animal rescue groups, including Valley Hills Animal Rescue, Humane Society of Southwest Missouri and Rescue One.

“Usually, one out of every 20-30 is what we take,” he says. “We really just look at energy and temperament. We don’t care what breed it is.”

If they pass, the dogs head off to “boot camp” for two to three months at Ozark Correctional Center in Fordland. Prisoners at the minimum-security state facility learn new life skills by training the dogs, who stay with the inmates during that time, he says.

Upon finishing at OCC, the dogs return to Howliday Inn for additional task training in public before connecting with their veteran for the first time. A trial period then determines if the two click as a team, Lopez says.

“If it does, they start coming back to classes. If it does not, we find a different dog for that veteran,” he says, noting an additional 18 weeks of training follows at no cost to the veterans or rescue groups.

Gerhardt says Howliday Inn gives K9s for Camos a discounted boarding and food rate that tops out at roughly $3,000 per month for all dogs.

Valley Hills Animal Rescue owner Mary Gillam says she’s been supplying dogs for K9s for Camo since it started. She estimates 95% of her organization’s canines come from the Springfield-Greene County Health Department’s animal control unit and many of those are “death row dogs,” meaning they are in jeopardy of being euthanized.

“We look for that behavior that John likes,” she says, estimating she’s supplied 40-50 dogs that have been selected. “You can’t just send any dog to test for that. They need to have a nice calmness about them.”

Goal setting
The annual goal over the past few years is connecting around 22 dogs to veterans, Lopez says.

“We were on track to probably do 28-30 this year,” he says, noting the number will likely be around 20, as the coronavirus halted training for several weeks. “We’ve probably helped close to 100 total over the years.”

Operating income reached a record-high $155,000 in 2019, an 82% increase from 2018, aided in large part by fundraising efforts at the organization’s second annual Camo-lot Ball. The gala, held at The Old Glass Place, generates about 80% of K9s for Camo’s yearly funds, he says. The third-annual event is still on track for September, but Lopez says he’s uncertain of fundraising prospects in the current COVID-19 environment.

Until this month, Lopez had been the sole employee of K9s for Camo, which became a 501(c)(3) in 2017. Steven Doty was recently hired as director of operations, thanks to a $50,000 grant through the Cook Family Foundation. Lopez also relies on a board of directors and around 20 volunteers for the nonprofit, which has a general coverage area within a two-hour radius of Springfield.

As K9s for Camo is largely focused on southwest Missouri, Lopez wants to eventually spread out to St. Louis and Kansas City before scaling outside the state. He’s setting a five-year goal to expand in Missouri and 10 years for points beyond.

“We want to be the standard for training and have great dogs,” he says. “It’s super impactful seeing it in person.”