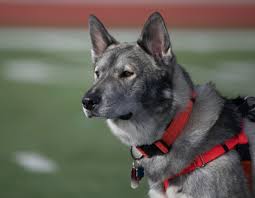 Mark and Carol Rickman ran across the frozen turf at the Neta and Eddie DeRose ThunderBowl for the first time with a brand new four-legged member of the Pack family.

“Roch” — a 1-year-old Siberian husky, malamute, boxer and Belgian Malinois mix — scampered with purpose from the west sideline, stopping at the Colorado State University Pueblo logo at the 50-yard line.

He didn’t mark his territory, but he seemed to know he was at home.

“He says, ‘I like this,’ ” Carol Rickman said as the pup pulled her across the field like a receiver running a quick out route.

“All this for me?,” her husband said, mimicking Roch as the pup stood tall staring at the south end zone.

“This is the first time he’s seen the field. He seems to like it,” Carol Rickman added.

Roch is the university’s new mascot in training.

The Rickmans and the university mourned the loss of beloved ThunderWolves mascot, Tundra, on March 12. Tundra was a greyhound and husky mix, but if you ask any CSU Pueblo alum, faculty, staff, student or community member, she was a full-blooded ThunderWolf. The Rickmans were known as Team Tundra on the CSU Pueblo campus and fondly called “Tundra’s parents.” Tundra was a rescue dog the Rickmans adopted from Colorado Springs All Breed Rescue in 2006.

Tundra became CSU Pueblo’s mascot in 2009 and epitomized the legendary animal which was envisioned in CSU Pueblo’s legend of a ThunderWolf, “a regal and majestic animal (that) evolved into the wisest and strongest of all.”

“She kind of took over campus. We went to all of the sporting events and all the events on campus. She was a therapy dog as well,” Carol Rickman said. “We still miss her dearly and her spirit will always be here.”

Tundra, who never missed a home football game during her tenure with the ThunderWolves, now has a little brother who will take on her duties.

Roch, pronounced rock, is in training.

“We thought that if another dog comes into our lives that we think would work well for this, we would love to do it again in her (Tundra’s) honor. So Roch was that dog,” Carol Rickman said.

She said Roch has a similar situation to Tundra in that he also is a rescue dog.

“He came from a place with really bad living conditions,” Carol Rickman said. “People were raising dogs to look like wolves, huskies, you know, that kind of thing. And so he actually escaped from that place by hopping a fence.”

Roch ended up in a shelter in Las Vegas, New Mexico. He later was placed in a foster home.

Like Tundra, Roch is a gentle animal — something Carol Rickman said is extremely important.

“He is very used to people,” she said.

Roch has been enrolled in classes in Colorado Springs to get his “Canine Good Citizen” certificate as well as his therapy dog certificate.

Roch is named after the patron saint of dogs and dog-lovers; bachelors; and the falsely accused.

“We thought that could come in handy to our players in case the refs decide to throw a few penalties their way that they shouldn’t have,” Carol Rickman said with a laugh.

“It will be fun. There’s a lot of hashtags we can come up with for his name: #RochStar, #MyPackRochs and #RochSolid. He can fit right in to all of that.”

The Rickmans said Roch is coming in to the fray at the right time.

Carol Rickman said 2020 has been a tough year, especially for CSU Pueblo with the loss of Tundra and so many other key figures in the Pack family.

“It’s been such a hard year and to end it with something kind of positive, and an excitement — I think it’s really important,” she said.

“It’s nice to have some good news for a change and I think it’s huge for the university. I really do,” Mark Rickman said.

Tundra gained national attention during the CSU Pueblo football team’s playoff run in 2014, when #FreeTundra became a trending hashtag due to the NCAA regulations restricting live mascots on the field during post-season competition. She was, however, known to watch many Pack athletics events via livestream when unable to join team on the road.

Tundra’s ability to howl on command with the ThunderWolf hand signal brought joy to many.

“We are working on that with Roch,” Carol Rickman said. “He howls a little bit as we leave, but we will try to work on encouraging that.”