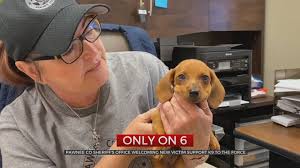 The Pawnee County Sheriff’s Office is welcoming a new partner to the force, Wrigley, an 8-week-old dachshund.

Wrigley has big plans for the future in Pawnee County to work as a therapy dog for children.

Sporting an “in training” vest, Wrigley makes his rounds to visit all the workers at the Pawnee County Sheriff’s Office. But he’ll soon be on the job as a victim support K9.

Wrigley sit with children who are crime victims during their interviews with law enforcement and even in court if a child has to testify.

“He’s supposed to relieve anxiety, bring just a calmness to them, make them more comfortable in a situation that’s otherwise a little traumatic,” said Administrative Deputy Lindsey Kopenhagen. “So far he seems to be fitting the bill, so we’ll see after he gets done with training.”

Kopenhagen has worked for the Pawnee County Sheriff’s Office for five years. She paid for Wrigley herself and is taking care of all his training costs and the costs that come with owning a dog.

She said when she decided to get a puppy, she knew she wanted one that could make a difference in the community.

“I was born here; I grew up here. I care a lot about this community, and I love where I’m at now. I love my job, but we don’t have a lot of resources. We’re a small county. We don’t have a lot of money coming in, so it was just an opportunity to be able to give back something,” Kopenhagen said.

Wrigley, who’s dad is also a therapy dog, goes to work with Kopenhagen every day and even has a bed under her desk.

“He’ll have introduction to new people all the time, new situations,” she said. “We’re gonna take him out to some of the functions that the reserves do, so he’s exposed to lots of different kinds of people and situations. He loves people and he’s super chill.”

Wrigley is set to start obedience training in the next month or two, then he’ll go on to a pet therapy program in Norman.

Kopenhagen says she expects Wrigley will be fully trained and certified by early 2021.

The sheriff’s office has had drug dogs in the past, but Wrigley is the county’s first therapy dog.