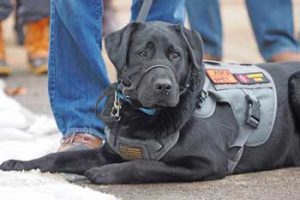 Before the Lions Club built the outdoor training area, the Clear Path NE facility had only an indoor one in the basement. This new outdoor training space is a large fenced area that will allow the dogs to be trained outside while being safely off-leash, said Donna Bulger, vice president of Clear Path NE.

Clear Path for Veterans is a nonprofit organization that promotes the well-being of veterans, and pairing veterans with a service dog is one of its many programs. Bulger explained that the dogs go through about two years of training before becoming certified service dogs, and that the organization strives to train 10 service dogs a year. Starting training early as puppies, the dogs go through an imprinting phase for the first three months. The next six to nine months involve socialization, where the puppies are brought to different places so they become used to new people and environments. Bulger said that since service dogs are not supposed to react to unfamiliar situations, this period of socialization is particularly important.

In the second year of training, the dogs learn specific tasks with which they will assist their paired veteran. Bulger said that to be certified, a service dog must be able to perform assistance in three areas, such as mobility, anxiety, and nightmares. The organization supports both the dogs and the veterans through this lengthy training process and continues to offer support even after the dogs have been certified and matched with a veteran. For veterans who already have a dog, Bulger explained that Clear Path NE offers free obedience training as well.

Harvard Lions Club member Bill Johnson said the club has been “returning to its original roots” over the past few years by participating in more “sweat equity projects.” In addition to Clear Path NE’s new service dog training area, such labor-based volunteer projects have included making and donating face shields and face masks, renovating the WHEAT Community Cafe and Food Pantry in Clinton, and building a fenced playground for a transitional living facility.

Johnson said the Lions Club stepped in when Clear Path NE ran short of funds to expand the facility. Building the training area took four days, a team of determined Harvard Lions Club members, and donations of supplies and time from several local companies. “We were blown away by the audaciousness of the project here,” Johnson said. “It’s just incredible how boldly [Clear Path is] moving to try to serve the veterans.” Building the training area entailed digging 31 holes for the fence posts and then constructing the fencing and setting the posts with concrete. Miller Fence and the American Fence Association donated the fencing materials, Moore Lumber donated a cement mixer, and Sterling Concrete donated pre-mixed concrete, Johnson explained. The project also required landscaping—the Massachusetts Nursery and Landscape Association helped the Lions Club organize a donation of 29 large shrubs from Bigelow Nurseries to be planted along the outside of the fence. Omasta Landscaping and Yellow Ribbon Trucking helped the volunteers with the planting. The donations added up to about $25,000, Johnson said, adding later that he had not anticipated the “over-the-top support.”

For the ribbon-cutting ceremony, a crowd of Harvard Lions Club and Clear Path NE members gathered in front of the new training area, along with three soon-to-be-certified service dogs. Johnson spoke about the project and the Lions Club’s commitment to service and praised Clear Path NE for the work it does to support veterans. “We’ve developed a fairly deep relationship with the folks here at Clear Path,” he said. “What drew us here was not only the incredible mission they have taken on to serve those who have served us, but also the bold and audacious way they are going about doing it.”

Bulger and Jeannine Germain, executive officer at Clear Path NE, handed out plaques to each of the organizations that helped make building the outdoor training area possible. “It takes a village, and we are so fortunate to have met the Harvard Lions,” Bulger said. The two then introduced three veterans, Chuck, Kelly, and Mike, and their black Labrador retrievers Harry, Fitch, and Spirit, respectively. These three service dogs have finished their two-year training and are ready to begin assisting their new families. Bulger and Germain presented the pairs with plaques officially certifying the service dogs and commemorating their graduation from training. “It’s an honor to be able to share these certifications with a group so that we can recognize publicly the hard work that goes into service dog training,” Bulger said.

The Harvard Lions Club will continue to assist Clear Path NE, Johnson added. Not only will the club be donating handmade face masks, but it will be renovating two wellness rooms in the building. Bulger said one room will be a yoga and mindfulness studio, and the other will be dedicated to treatments such as reiki, acupuncture, and art therapy.

Clear Path NE is located in a large brick building that was a military hospital in the 1930s. With what was once an operating room upstairs and rooms that had been a jail and a morgue in the basement, the building has interesting historical roots and military ties, but it needs to be redone inside to accommodate its new purpose, Germain said. The renovation project is well underway, however, especially due to help from organizations like the Harvard Lions Club.

“The sky’s the limit,” Germain said. “We’ll plug in the ideas as we come up with them. We have plenty of space to do it all.”

During a tour of the facility, Germain explained the many programs the organization will offer once the building is renovated. For instance, there is a wellness wing with office space for clinical health care tenants, and where the Lions Club will be expanding the space to include the two new wellness rooms. The building also has the indoor service dog training area, a kitchen to offer culinary classes, a function hall for serving meals and hosting large events, and space for food and toiletry donations, as well as space for a future dog grooming facility, barber shop, and resiliency gym.

Together, Bulger and Johnson cut the ribbon hanging across the entrance of the new fence, officially opening the outdoor training area and a new opportunity for Clear Path.