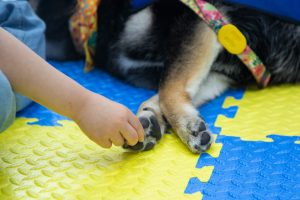 At a rehabilitation center on the outskirts of Shanghai, a mini talent show is about to begin. Eight dogs and their owners are lined up outside a small function room, waiting for their names to be called.

One by one, the pooches scamper into the room and perform a series of tricks: shaking hands, jumping through rings, and pretending to pray. Before long, they’ve won over the small group of children sitting in a huddle on the floor.

The Children’s Day show is a fun morning distraction, but it also has a serious therapeutic goal. The 10 kids in the audience all have autism spectrum disorder, and the therapy dogs are here to help them feel comfortable, engage with their surroundings, and become more open to communicating with others.

“The talent shows are the fastest way to get close to autistic children,” says Wu Qi, founder of Paw for Heal, the dog therapy nonprofit putting on the session. “Only when the children like dogs can the first step toward treatment be taken.”

Animal-assisted therapy (AAT) is a relatively new phenomenon in China, but its popularity has exploded this year. In April, celebrity livestreamer Li Jiaqi shared videos of his pets training at Wu’s therapy dog academy with his 17 million fans on social platform Weibo, introducing many to AAT.

For Wu, the endorsement has been a game-changer. Before Li’s intervention, Paw for Heal had nearly 90 certified therapy dogs on its books, serving autistic children in 10 cities across China. In the weeks since, over 1,000 dog owners have signed up their pets to the program.

The new canine recruits will soon enter Paw for Heal’s AAT training program, which runs for six months and costs 100,000 yuan ($14,000) per dog. The course is designed to ensure the animals have the right temperament to work with kids: They must be friendly, obedient, and tolerant of occasional improper behavior like biting and scratching, according to Wu. Only around 20% of the dogs will get certified after completing the course, he estimates.

Promoting AAT in China has been a yearslong passion project for Wu, a celebrity pet store impresario and animal trainer who’s known to his fans as the “dog whisperer.”

The 38-year-old tells Sixth Tone he has personal experience with the difference animals can make to a child’s development. He was “extremely introverted” as a young boy growing up in the eastern Zhejiang province, until one day he found an abandoned puppy in a trash can. Taking care of the dog over the following years helped bring him out of his shell, he says.

The talent for training dogs came later, after university, when Wu adopted a husky that had a habit of tearing up sofas and defecating all over the house. “I had no choice but to learn how to train him,” says Wu, “by gathering information online and asking experienced dog owners for advice.”

Wu started off his career working in IT, but in 2006 he quit his job to open a pet store in the eastern city of Nanjing. The business grew, and in 2011 Wu expanded into dog training schools. He soon became well-known for his skill with handling animals, appearing on hundreds of TV programs showing off his well-drilled charges.

A chance encounter in 2012 made Wu wonder whether his trained dogs could do more, he says. A parent got in touch with him after seeing the “dog whisperer” on TV and asked if she could bring her son to the training school.

“I found the boy was shy and unwilling to talk with me, which reminded me of my own childhood,” says Wu. “But as soon as he saw my dog, he became active and happy.”

It was only later that Wu learned about autism spectrum disorder. He was fascinated by how the boy, despite being reluctant to engage with people, showed such interest in dogs.

After doing more research, he discovered that people in Western countries had been using animals-based therapies for over a century. International studies have found that trained therapy dogs can bring visible benefits to children with autism, with data indicating that kids are more talkative and socially engaged, as well as less aggressive, when their therapy sessions include a dog. Yet no AAT program existed in China at the time.

Wu became determined to popularize dog therapy in his native country. Over the next few months, he visited several special-education facilities, researched AAT intensively, and began to train dogs according to international AAT standards.

Convincing Chinese parents and schools to accept AAT, however, has been a challenge. When Wu first began reaching out to institutions offering his help, most turned him down, saying they’d never heard of such a thing. Many worried the dogs would hurt the children, Wu says.

But after eight years of continuous effort, Wu’s beginning to make headway. The center in Shanghai’s Jiading District where Wu is running the June 1 trial session contacted him directly, after hearing about the benefits of AAT.

“Therapy dogs are like a bridge, as kids with autism are more willing to interact with animals than people,” says Shi Cui, the center’s director. “If they want to play with the animals, they first have to engage with people. It can improve their social engagement.”

When the first therapy dog walks into the room, one of the children — an 8-year-old boy — squeezes his eyes shut and covers his ears with his hands, while the other children and their parents cheer.

Shi gently encourages him to open up. “I tell him how cute the dogs are and try to remove his hands,” she says. When the third dog enters, the boy raises his hands, asking to pet the animal.

When the talent show is over, the children are divided into pairs, stroking and playing with the therapy dogs under the supervision of Wu and other volunteers. After a few minutes, several children who began the session crying and screaming ask to walk the dogs in the corridor.

The sessions are designed to treat common issues associated with autism, Wu explains. Children with autism typically have difficulty fully opening their hands. So, before they pet the dogs, volunteers ask the children to hold their palms out flat and place food on them to feed the animals.

“This way, children can take the initiative to exercise their nerves and muscles,” says Wu.

Similarly, the volunteers ask the children to make eye contact with them before they’re allowed to pet the puppies, to help reduce their aversion to looking people in the eye.

Not everyone, however, is convinced. According to Shi, the parent of one child at the center is “strongly opposed” to the AAT event and has told her the use of therapy dogs is “nonsense.”

“I explained to him that as a parent he needs to think outside the box and be more open-minded,” says Shi. “If he won’t allow his son to try the dog therapy, how could he know if the program is effective or not?”

A few days after the trial, Shi tells Sixth Tone she plans to integrate therapy dogs into the children’s rehabilitation as well. The center already runs a weekly program at a riding center in Shanghai, where the children are allowed to interact with horses, she says.

Other rehabilitation centers are more cautious. Despite making significant progress toward acceptance since 2012, AAT remains a fringe practice in China. There are currently more than 10 million people with autism in the country, but only around a dozen institutions nationwide use therapy dogs.

“I’m very cautious about the effects of these projects,” says Pan, who declined to give her full name for privacy reasons. “Many so-called advanced ideas from abroad are not that effective.”

Before introducing AAT, Pan says she’d need to see the program at work with her own eyes. For example, Wu and his team would need to give dog therapy sessions to one child at her facility, to prove that the treatment can help decrease the frequency of the child’s negative emotional outbursts.

“If the child does experience a significant improvement in mood — a substantial change — then I’ll believe it does have an effect,” says Pan.

Wu hopes the trial is just the start. He has ambitious plans to capitalize on the publicity brought by Li Jiaqi to expand Paw for Heal, which currently has 12 full-time staff members and thousands of volunteers.

Wu’s other pet businesses already subsidize the running costs of the dog therapy program. Now, he plans to recruit more therapy dogs using a “time bank” scheme, where animals will receive benefits such as free baths and checkups at partnered pet stores in exchange for time spent in treatment sessions.

Another cooperation deal will see Wu partner with a well-known Chinese stem cell therapy firm, which he hopes will give therapy dogs access to treatments that will improve the dogs’ quality of life.

Paw for Heal is also looking beyond running therapy sessions for children with autism. The group is working with centers to offer treatment to elderly people with cognitive disorders such as Alzheimer’s disease — which affects over 9 million people in China — and children with leukemia.

“Almost every nursing home in developed countries has therapy dogs, whereas fewer than 1% in China are equipped with them,” says Wu. “I hope more people will know that dogs aren’t only part of our families, but can also influence people and give us a new understanding of life.”