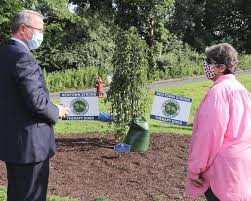 Libby, a Golden Retriever who died in June, was memorialized last month on what would have been her 13th birthday.

Her human, Ann Marie Cioffi of Sandy Hook, was surprised by friends and members of Newtown-Strong Therapy Dogs (NSTD), who had arranged for a tree to be planted and a plaque honoring Libby to be installed near the town’s animal control facility and dog park.

The group had arranged for Cioffi to be driven to the surprise location by telling her they would gather for pizza on the anniversary of Libby’s birth. While the gathering was purportedly to be at Cioffi’s home, she was somehow convinced to go for a ride with Marianne Huniyak around 5 o’clock Thursday afternoon, July 23. When Cioffi and Huniyak arrived at the parking lot for the town’s animal control center, Cioffi just went with the flow.

When she saw signs for Newtown-Strong Therapy Dogs and nearly two dozen people seated under a pair of pop-up tents, she still did not realize that they were there for her.

Most of those in attendance had not seen each other for a few months. Aside from the afternoon of July 15, when a new handler-canine team was certified under special modifications, NSTD events have been canceled in recent months due to the pandemic.

Even after NSTD handler Liz Luzietti presented her with a few gifts on behalf of the group, Cioffi still did not realize what was happening.

It was not until First Selectman Dan Rosenthal joined the group that she began to really wonder what was going on. Luzietti invited Cioffi to join her and the first selectman near the recently planted tree, telling her that the tree was a gift from the group.

In a very brief ceremony, Rosenthal then unveiled a permanent memorial to the dog Cioffi said recently was the very reason Newtown-Strong exists.

A weeping cherry tree has been planted on the corner of the driveway where Old Farm Road intersects with the driveway shared by Newtown’s animal control center and Newtown Park & Bark. To the north of the tree, a small brass marker has been installed with help from Newtown Parks & Recreation.

The marker has a blue background and features an inscription with Libby’s name, her face, and the dates of her birth and death. Two lines also note her as “Loving Matriarch of Newtown-Strong Therapy Dogs.”

“This is the tough part of owning dogs,” Rosenthal said, speaking to Cioffi. “Losing them is so difficult.”

“We all know dogs have a way of saying so much, by saying so little,” he added. Calling it noteworthy that Cioffi’s friends and fellow handlers had arranged for the monument and tree to be unveiled on what would have been Libby’s birthday, Rosenthal said her spirit “will always be here, looking over everybody.”

Even behind the dark sunglasses she was wearing, it was obvious the afternoon’s guest of honor had watery eyes at that point.

“What a great honor for Libby,” she said. “Thank you all so much. I can barely talk right now.”

Luzietti was the first to speak after that. When she told Cioffi, “You and Libby have done so much for so many,” murmurs of agreement were heard.

“She would be prancing around if she could,” Franke said, “with her lead in her mouth.”

Therapy dogs have been around for years, but many Newtown residents were introduced to them following 12/14. When residents began looking for some way to help them grieve, many found dogs waiting to be petted, hugged, talked to, or even sat beside in silence.

Cioffi formed NSTD, she told The Newton Bee in 2018, after seeing the response by fellow residents to Libby in the immediate aftermath of the shooting at Sandy Hook Elementary School.

Based on her visits with Libby in December 2012, Cioffi felt there were many people who would benefit from continued visits with therapy dogs.

While borne out of tragedy, NSTD remains active and localized. That makes it different from many other comfort dog programs, according to Cioffi, a Sandy Hook resident and professional dog trainer.

In many other cases, therapy dog teams are called on to respond to a tragic event. They drive or fly in to a location, offer what comfort they can, sometimes for a few months, but then they return to their homes.

“We felt such a need for this community,” Cioffi said two years ago. “So many people needed that therapy dog.

“The reason I wanted to start this local group,” she continued, “was because we had dogs in from all over the country, but I knew that they weren’t necessarily going to be hanging around in the aftermath months.”

Libby was already certified at that time through Therapy Dogs International, according to Cioffi. When she began thinking about forming a localized therapy dog group, however, Cioffi decided to go with a different program. After doing research, she found Bright & Beautiful Therapy Dogs, a 501(c)(3) organization based in northern New Jersey.

Ms Cioffi and Libby, joined by Marianna Beard and two of her dogs, traveled to Ellington and were certified by Ms Quinn within weeks of 12/14. Two more canine-handler teams were tested and certified through Bright & Beautiful within the next few weeks, said Ms Cioffi. That group became the original core of Newtown-Strong Therapy Dogs.

In a post on NSTD’s Facebook page two days after her dog’s death, Cioffi said she felt compelled to write about Libby, “to share the wonder of who she was and the love she so freely gave to every person and creature she ever met.”

AKC titled in Obedience and Rally, certified in Tracking, and the 2014 recipient of The Golden Retriever Club of America Gold Standard Award, Libby, Cioffi wrote, passed down “her stellar temperament, brains and confidence” to four generations of puppies and their offspring.

Even with the aforementioned honors, however, Cioffi felt that Libby’s biggest accomplishment in life began in December 2012.

The day after the shooting at Sandy Hook School, Libby and Cioffi went to work, she shared on Facebook.

“Libby took me into town the next day, and every day for the next two weeks, as hundreds of people came to express their sorrow and pay their respects. She worked for hours each day, tirelessly comforting everyone who needed her, while she herself absorbed the hurt, pain, and devastation of the people in our town.

“Every day she endured huge TV cameras thrust without warning and without diplomacy into her face. Within the huge crowds, she often got shoved and stepped on. Cars nearly running over our feet because sidewalks had been extended into the road to accommodate the daily hundreds of people and press.

“The crowds and the noise were sometimes overwhelming, sirens often blaring within inches of us, but Libby always held her ground; she never flinched, not once! Each day, both utterly exhausted, we made the trek home.

“Libby was so depressed on those evenings, but the next day she would get up and be ready to go again to bring some measure of comfort where she could,” Cioffi posted on Facebook. “My own role in this was simply to follow Libby.”

In an e-mail shared with The Newtown Bee, Cioffi said her late companion “alone is the reason that Newtown-Strong exists today. She started it, she carried it, she grew it.”