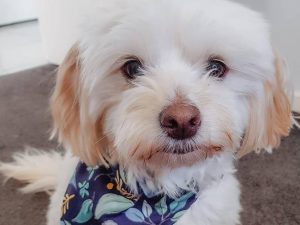 Brisbane woman, Ashleigh Annet never saw herself as a ‘dog person’ until she found herself completely smitten for a “little white Shih Tzu” at a family Christmas party in 2016.

A few months later, Ms Annet and her husband got a Maltese Shih Tzu named Lola and the pint-sized pup quickly became a special part of her life.

“I don’t know how I got so lucky but she’s just so happy to sit on my lap and people watch. I try and take her out at least once on the weekend and people come over because she’s just got a really soft, gentle personality.”

Ms Annet credits Lola’s temperament to a mixture of nature and nurture. With a professional background in foster care, the 30-year-old was inspired to use a “force-free and positive reinforcement framework” when it came to Lola’s training.

“I work with kids in foster care and part of my job is to educate parents and carers on how to do therapeutic parenting and while Lola is a dog I used some of the therapeutic practices on her too,” she says.

“This looked like ignoring the behaviour we didn’t want to see, praising when we saw good behaviour, using lots of treats and redirecting.”

Although Lola’s personality has always been docile, friendly and patient, the idea to train her to become a volunteer dog came from Ms Annet’s grandma.

“She was in an aged care facility and I used to take Lola along,” she said. “We noticed some of the aged care residents would come up and talk to me, or come up to pat her which was nice.”

“We had to wait a bit until she was old enough to enrol her in the program – they have to be 18 months before they can get assessed – but Lola was already pretty well trained,” says Ms Annet.

“She was already interested in people, she already knew how to take food gently but the big thing we had to do was work on loose lead walking. That took a really long time and a lot of hard work.

“We started training in our lounge room where there were no distractions but when we progressed outside it would take 10 minutes to walk 10 meters.”

Once Lola became comfortable walking on a leash, she passed the Delta Society assessment with flying colours.

“It did feel a little bit like an exam. Dogs have their own kind of personalities and they have days where they’re a little less attentive,” she says. “But Lola was absolutely perfect”.

While Delta Society have currently paused their new volunteer intake due to COVID-19, Ms Annet only has encouraging words for anyone thinking of joining the program.

“Lola’s beautiful personality has allowed us an opportunity to volunteer our time with people that often lack human connection,” says Ms Annet. “This has enriched my life by allowing an opportunity to extend compassion and empathy out to others that are in need.”

Having passed their one-year anniversary with Delta Society in August this year, Ms Annet says she gets as much from the sessions as Lola does.

“It’s like Lola is a really nice ice breaker for people who are seeking out that connection,” she says.

“They’ll talk about dogs, share their fond memories and talk about how cute she is but it’s more of that connection with me over Lola.

“I wasn’t expecting that part of the process but it’s been really enjoyable.”

But it’s not just the pooches who are put under the microscope, Ms Kyiet says attributes of the owner are “equally important”.

“As volunteers could be placed in sensitive environments such as cancer wards, palliative care, correctional facilities, rehabilitation wards, or mental health services, they need to be able to approach their role with empathy, sensitivity, and resilience,” she adds.

“A Delta Therapy Dog Team may regularly attend a cancer treatment ward and meet outpatients who are receiving treatment on a weekly basis. In this setting the team becomes a part of the person’s treatment and healing.

“They may also meet with patients who are admitted to the hospital and who are facing the devastating reality of their illness. While our teams provide a comforting presence with friendly smile and paw-shake; our volunteers also need to be able to respond in a way that is mindful too.”