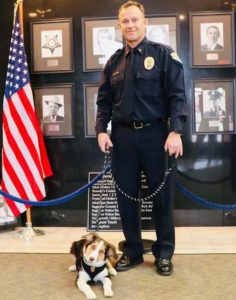 The Saginaw Police Department is getting a new K-9 to specialize in comforting cuddles instead of tracking down and stopping crime.

The Saginaw City Council unanimously approved an adoption agreement for a therapy dog for the Saginaw Police Department’s Victim Services Unit (VSU) during a virtual meeting on Monday, Dec. 21.

The agreement is with Michigan Doodle Rescue Connect (MDRC) in the amount of $1 to adopt Reba, a 5-month-old mini Australian shepherd. The rescue organization will cover any and all expenses related to the feeding, licensing, training and medical care of the canine, according to the agreement.

“At a time when so many are facing hardships and loss, we need to offer additional support to our victims and those impacted by traumatic crime,” said Police Chief Bob Ruth. “There couldn’t be a better time for this sort of resource in our community. I want to thank Michigan Doodle Rescue Connect for their partnership and support.”

The young pup spent the first few months of her life at the MDRC Ranch where she received basic training before recently being transitioned to her handler Lt. Dave Kendziorski.

“Reba will be training with me over the course of the next month or so to get fully adjusted to her new job and environment,” said Kendziorski.

Reba is expected work her way up to obtaining certification from Therapy Dog International. In the meantime, she will be assimilated into the Police Department’s physical building and will gradually meet department members. The pup will not receive the same training nor be used in the same manner as patrol K-9s, according to the City of Saginaw.

“Reba will be used to support victim advocacy and used in interviews with juvenile victims, with victims of domestic abuse, and on scene after traumatic events, in addition to being a regular uplifting force within the department,” said Kendziorski.

According to the Saginaw Police Department VSU, a therapy dog can greatly reduce heightened short-term anxiety following a critical situation with the added effect of assisting victims increase their sense of recall during their interactions with law enforcement, which in turn can increase the chances for a successful investigation and prosecution.

The department stated that program will assist all staff to cope with exposure to traumatic events, and support efforts aimed at increasing resilience to improve mental health and wellness.

MDRC released a statement explaining why Reba was the perfect dog for the job.

“As Reba approaches a person, her size will not be intimidating,” said MDRC. “Her tail is short so she won’t knock over a glass of water off a table, for example. These are important factors when working with therapy dogs.”

MDRC rescues, transports, and provides medical, dental, and mental health services to dogs who have been surrendered from the states of Michigan, Illinois, Ohio, and Indiana.