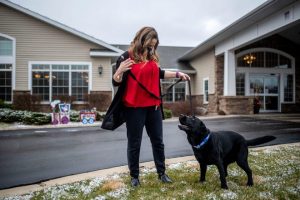 The coronavirus made 2020 a long and lonely year for many residents at the long-term care facility, so staff at Lakeview started a therapy dog program to bring them comfort and joy this holiday season.

Before the pandemic, volunteers and family members regularly brought animals into the pet friendly facility to visit residents, but health precautions halted all visits in March.

“When we move people into Lakeview, we promise that we’re going to provide them an enriching life”, said Dawn Dye, whose job is life enrichment director at Lakeview Assisted Living. “So trying to really think outside the box to find safe ways to still provide spiritual, emotional, cognitive ways to keep them engaged – it’s been a challenge.”

Residents have relied on each other for company this year, but not being able to spend time with family during the holidays is especially hard, Dye said.

Uma is bringing them some comfort by spending a few minutes with them in the lobby or by coming to visit them in their rooms, whatever the residents need.

“She can bring distraction … It just brings a lot of joy at a time when things can kind of get sad,” she said. “I believe it was meant to be.”

Long before she started work as a therapy dog, Uma was familiar with Lakeview. She lived there with her owner, who is a resident. Eventually, he could no longer care for Uma himself, but he was loathe to give her up.

So, Dye found an outside-the-box solution and offered to train Uma as a therapy dog.

“She could then work and love all the residents here, and he didn’t have to give up his dog,” Dye said. “It was kind of a win-win for everybody.”

During the day, when Uma isn’t working with other residents she spends time with her owner. At night, Dye takes her home to care for her.

Working with Uma is just one of the ways Dye and the staff at Lakeside have tried to keep residents’ spirits high this year. At Halloween, they planned a costume parade, and during the Christmas season, they found ways to adapt holiday traditions while keeping everyone safe.

“Communities are trying to do more to help the residents during this difficult time,” Dye said. “The staff is always willing to do whatever they can to bring joy to the residents.”

Prior to working with Dye, Uma didn’t have any training as a therapy dog, but she took to the work quickly and is now certified.

“I believe she was made for this,” Dye said. “She loves all the residents. They love her. She’s very calm, and it’s just amazing when she walks in the room and the residents light up.”

“I just love that dog,” Griffin said. “She’s so much company to me.”

Before moving into Lakeview last February, Griffin had a dog of her own. She didn’t think it would be happy living in an apartment, so she gave the dog to her son.

During the pandemic, she hasn’t been able to visit with her family or her dog, so Uma has been a welcome visitor.

When Uma stops by, Griffin likes to give her treats, and then they spend time cuddling.

“She’s so loving. She’ll get right up on your lap,” Griffin said.

Griffin said she’s adjusted to the changes brought about by the pandemic this year, and although Christmas will be different from the one she was expecting, it’s not all bad.

“It’s just the way life is right now,” she said. “We just have to make the best of it.”

Between Zoom calls with her family, the care of the Lakeview staff and visits from Uma, Griffin said she couldn’t be happier, and she’s not letting what isn’t possible bring her spirits down.