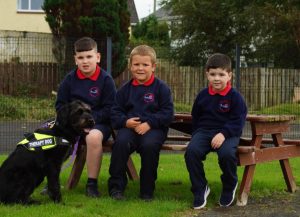 A Derry primary school this week welcomed a new member of staff – its very own therapy dog.

Joy will be used to provide comfort and reassurance to pupils at St Oliver Plunkett Primary School after studies have shown that therapy dogs have a positive impact on children’s mood and behaviour.

St Oliver Plunkett is now the only mainstream school in Northern Ireland with its own personal pet.

The school has teamed up with the Assistance Dogs NI charity which currently provides two therapy dogs to special needs schools in Belfast and Limavady.

Principal Eamonn Moore said he was sure Joy would be of great benefit to the school’s pupils.

He explained how he came across the work of therapy dogs.

“I chanced upon a short clip from a school in England showing a child engaging with the school dog,” he said.

“The vice-principal Mrs Hislop and I were immediately struck by the positive impact the dog was having on the child’s mood and behaviour.

“We were both intrigued as to the possibilities this might present to us in assisting our children to build resilience and develop good mental health.”

Mr Moore said that after researching the topic, he contacted Assistance Dogs NI and started the process of St Oliver Plunkett securing their own dog.

“The level of training required before these dogs are ready to meant that we have to wait 12 months to acquire our very own therapy dog and I am told that our own puppy has already started training.

“However, I did not want our children to have to wait a year for this opportunity so I have worked closely with ADNI to secure a temporary therapy dog who will be with us for two days every week.”

Once the school receives its own dog next year, the dog will live with a member of staff and will come into work each day.

A special timetable will be created to ensure that as many children as possible with be able to enjoy the company of the therapy dog.

In the meantime, Mr Moore said that Joy would reside in the school’s designated therapy room.

“Joy is no ordinary dog. Like all therapy dogs, she had been intensively trained to work with children in a therapeutic way.

“I expect Joy to have a hugely positive impact on all the children, given the numerous emotional, physical, psychological and cognitive benefits therapy dogs offer.”

Geraldine McGaughey from Assistance Dogs NI said the charity provided its first therapy dog to a school in Belfast in March 2019.

Since then, she said, they had received a lot of enquiries from other schools after people have seen the benefits that the dogs provide.

“What we find is that the dog is a motivational tool where staff can use the dog in managing challenging behaviour in the classroom.

“The dogs are able to do things that humans are not able to do such as relaxing the children.”

Geraldine said the plan with Joy was for the local school to select children who they believe would benefit most from being in her company.