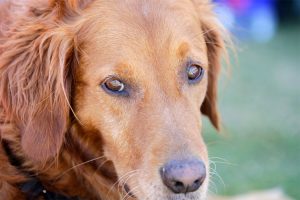 Pawsitive Teams is a service and therapy dog program founded in San Diego in 1997.

The partnership between Ricochet and the organization directly addresses the mental health crisis affecting healthcare professionals during these difficult times.

In every other crisis, therapy dogs are called upon to provide comfort and healing. But, due to social distancing and quarantine, animal-assisted therapy programs have been suspended.

“At a time when dogs could be truly valuable resources, we’re thinking outside the box in an effort to offer some form of canine therapy to the millions of people around the world who need it,” explained Judy Fridono, Ricochet’s guardian.

The dogs have more than eight years of experience providing human-animal intervention for active duty service members recovering from post-traumatic stress disorder (PTSD), moral injury, anxiety, and other mental health challenges under the guidance of an experienced recreational therapist.

Eye contact is one of the anxiety-reducing techniques that is used between the service members and the dogs.

Gazing into a dog’s eyes stimulates the release of oxytocin – a hormone associated with positive, happy feelings.

After receiving long gazes from a dog, a person’s level of oxytocin increases, thus reducing stress and anxiety.

To assess the scientific validity of the effects of eye contact between a human and a dog, Ricochet, Fridono, and an army veteran with PTSD participated in a study at Duke University’s Canine Cognition Center with research scientist Dr. Brian Hare.

“Knowing what I do about eye contact producing oxytocin, I wondered if looking at close-up photos of dogs’ eyes coupled with calming music would have the same result,” notes Fridono.

Researchers have already determined that looking at photos of nature for 30 to 60 seconds reduces stress.

Hundreds of individuals who have participated in the virtual canine therapy program have reported they felt a calm, connected state of being.

Cultivating these moments allows for deep experiences of connection regardless of whether physical contact is made.

All you need are a human and a dog with open eyes and open hearts.

It is critical to recognize that the Covid-19 pandemic is a source of great physical, psychological, and emotional distress for front line workers as well as individuals and communities around the world.

There will likely be doctors, nurses, and others who will need treatment for anxiety, stress, depression, PTSD, and more resulting from this crisis.

Then there is the rest of the world that is feeling the panic of losing jobs, being ordered to stay home, the unfathomable reality of not being there when a loved one passes, and the like.

The proactive steps of Ricochet and Pawsitive Teams offering virtual canine therapy with eye gazing will support healthcare workers, essential workers, and the world at large now, as well as into the future.

The best part is, it can be done on any computer or mobile device connected to the internet, and it only takes a couple of minutes.

Stressed individuals can take a quick break from the chaos and find themselves less anxious after engaging in the program.

Let’s help heroic men and women take a few minutes to breathe and decompress through a dog’s eyes.