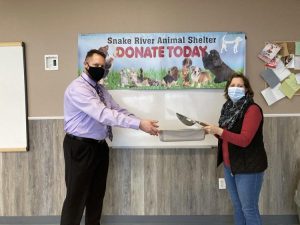 The new year will mark a new chapter for the Snake River Animal Shelter. Executive Director Kristin Sanger is stepping down and a new executive director will take her place. Sanger’s final day will be Dec. 30.

Sanger has accepted a new job as treasury management officer at East Idaho Credit Union. She plans to stay involved at the shelter by serving as a volunteer.

“Everybody has their season and it was just feeling like it was time to move on professionally. I had an opportunity open up to me at East Idaho Credit Union with full benefits. My family really needed the benefits, especially with the pandemic and health concerns surrounding that. The pandemic really motivated me to make this career change,” Sanger said.

Taking her place will be Stephen Buzzell. Buzzell, a police officer for nearly 17 years, ran the Rexburg Animal Shelter from 2003 to this past August. In that time, he increased adoption rates, decreased euthanasia rates and formed partnerships between other shelters.

“I’ve got big shoes to fill. … But I’m looking forward to the chance to help more people and animals,” Buzzell said.

Sanger has been running the shelter since it first opened its doors in 2015. In that time, she has overseen the adoption of more than 5,000 animals.

Under her leadership, Snake River Animal Shelter has been a factor in lowering local euthanasia rates, Idaho Falls animal control officer Danyelle Harker told the Post Register in a 2019 interview. Between 2008 and 2014, the Idaho Falls Animal Services cat euthanasia rate stayed between 70.6 percent and 78.3 percent. Then, in 2015, the first year of Snake River’s existence, the cat euthanasia rate dropped to 68.35 percent for the first time. Each year, the percentage has continued to drop until it reached last year’s record low of 20.68 percent. Dogs saw a similar decrease, falling from a 36.45 percent euthanasia rate in 2008 to 1.36 percent in 2018. Other factors include the Idaho Falls Animal Shelter closing its drop box in 2018 and participating in spay and neuter programs.

Sanger is most proud of the programs she has designed and implemented at the shelter. These include children education programs, medical care programs and spay/neuter programs. Her favorite program is the Idaho K-9 Academy. The idea started after Sanger realized 17% of the animals adopted from the shelter were being returned, mostly due to behavioral issues. The Idaho K-9 Academy improves behavior in shelter dogs so they are less likely to be returned, assists dog owners with their pets’ problem behavior so they don’t end up at the shelter and trains shelter dogs to be service animals.

“I’m going to really miss the animals. I’m going to miss the staff and people. Everybody that comes in here to adopt an animal, honestly, are really fantastic, salt of the earth individuals. The best people are involved in animal welfare,” Sanger said.