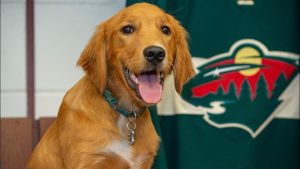 The future of the NHL season is still up in the air, but that’s not stopping the Minnesota Wild from making some adorable roster moves.

Hobey will be raised and trained to be a service dog for a veteran through the team’s Adopt-A-Dog Program, whose mission is to give a local hero a hero of their own. “We’re excited to continue our Adopt-A-Dog Program and help another rescue dog become a service dog,” said Wayne Petersen, Minnesota Wild Director of Community Relations and Hockey Partnerships. Hobey is the second dog adopted by the team from Coco’s Heart Dog Rescue. The Wild adopted Breezer last August, and the Labrador Retriever is now training with Soldier’s 6, a nonprofit based in Minnesota that provides honorably discharged veterans, police officers, and firefighters with specially trained K-9s.

Wild CFO Jeff Pellegrom and his wife Mary will foster Hobey and work on his basic obedience training until next summer. Then, the Wild pup will join Soldier’s 6 for specialized training before being permanently placed with a veteran as a “Battle Buddy.”

Hobey was born in February of this year in Wisconsin. His favorite toys are sticks, especially hockey sticks. Hobey’s position is Forward, and of course, his favorite team is the Minnesota Wild.