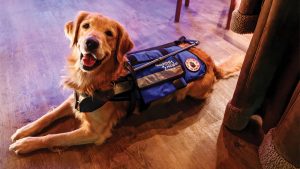 A dog that removes anxiety from its human’s life by killing the people who cause her stress may be a heightened, fantastical look at emotional-support animals, but because there is now such a wide range of small-screen content depicting such therapeutic resources, one does not have to represent all. Education about them is mixing with entertainment.

A killer emotional-support dog is at the center of Blumhouse Television’s latest “Into the Dark” installment for Hulu, “Good Boy.” But even this horror satire may expose an audience to the idea of emotional-support dogs for the first time. That is why, according to Sheila Goffe, vice president of government relations, American Kennel Club, no matter the genre or format, the most important thing when depicting such dogs is to do so accurately for their classification.

“These dogs mitigate individual disabilities, and they’re simply amazing,” she says. “A dog that helps with mobility assistance is going to look quite different from a dog that is helping with invisible disabilities such as PTSD or military sexual trauma. There are many different services these dogs provide, but there is always a behavioral standard. So, nailing down that behavioral standard is absolutely key for representation.”

This has become even more important now that there is a slew of series showcasing service and support dogs. “Good Boy” may be the most recent example, but in the past few years storytelling has opened up greatly — from tales about guide dogs in the CW’s dramatic “ In The Dark” and Disney Plus’ docuseries “Pick of the Litter”; to exploring emotional-support dogs in Netflix’s “The Healing Powers of Dude” and the second season of “Ramy” on Hulu; as well as K9 officers working in the fictional world of CBS’ “SEAL Team,” real-life cases in A&E’s “Live PD” and in fabricated obstacle courses in “America’s Top Dog.” Other unscripted projects in this vein include the aptly titled “Dogs” on Netflix and “It’s a Dog’s Life” on Disney Plus.

A&E’s “America’s Top Dog” was developed based on how the audience of its network and production company Big Fish Entertainment’s previous collaboration, “Live PD,” responded to the K9 officers. While on “Live PD,” all the dogs followed are actual working K9 officers trained to detect drugs or take down suspects, “America’s Top Dog” is a competition program that pits such trained canines against everyday pooches whose tricks often mimic such police work.

“Watching them chase a scent, that’s what they’re trained to do to keep us safe and keep drugs off the street, but all dogs can be trained to scent,” says Elaine Frontain Bryant, executive vice president and head of programming, A&E. “We thought it was a fascinating way to open the aperture of showing what they do in the real world but also make it seem game-ish. It was a narrow needle to thread, but we thought about, ‘How do we broaden it enough to be entertaining and not just K9 school?’”

Corinne Kingsbury, who created and runs “In the Dark,” admits she “had no idea what a guide dog was even capable of before writing this show.” Although she does not set out to include teachable moments in episodes, simply writing lines such as “Pretzel, find outside,” with the camera following the dog lead actor Perry Mattfeld in the correct direction, are lessons in the skills these dogs need.

“There are just so many different services these dogs provide, but the common denominator is really getting that well-behaved nature down, and then wherever possible looking to true authorities on those disabilities to understand what this is going to look like,” says Goffe.

Lorri Bernson, who works with Guide Dogs of America and also uses a guide dog herself, served as a consultant on “In the Dark,” advising the show about proper depiction.

“Lorri reads every script and every outline and she emails us her story thoughts or she calls us and says, ‘In this scene, the command would be this,’” Kingsbury says.

Additionally, Bernson gives notes on when Murphy would not use a guide dog at all, including when she’s in her own home and just going to the kitchen — “She knows her own space,” Kingsbury explains. And when Murphy is walking into dangerous situations, which may not happen in every episode but is certainly frequent in her world of money laundering and corrupt cops, she uses her cane instead of her dog in order to keep him out of harm’s way.

Although Kingsbury says that Murphy’s guide dog is “like a limb to her,” he also acts as emotional support. “When we met her at the beginning of Season 1, she rejected love at every turn,” she explains. But in Season 2, her dog Pretzel is “her guy and she loves him like a best friend. It’s such a special bond.”

And even though “Good Boy” is a horror satire, its inspiration and core message comes from a very real place, as well. Writer and executive producer Aaron Eisenberg has a terrier mix named Francine who was “prescribed when my anxiety was so bad and nothing was helping,” he says. “My psychiatrist said, ‘Have you thought about getting a dog? It’s something you can think about outside of yourself — something to take care of.’”

The streaming project showcases that therapy through Judy Greer’s character. She brings home an emotional-support dog that “promises a lot and starts to clean up [her] life and improve it in many ways,” Eisenberg says. It comes with a cost, of course, and “also talks about to what length somebody goes to to be happy and what is sacrificed and who is sacrificed,” but many of the scenes are still inspired by real-life dog experience he and his brother, co-writer and executive producer Will Eisenberg, have had.

“The amazing thing about these dogs is that for many people without these dogs their world is somewhat enclosed. These dogs open up a whole new world for people — to go places they couldn’t otherwise go and do things they couldn’t otherwise do — because they have this assistance,” says Goffe. “I think the extent to which we can document all of the different ways these dogs help people is doing a huge service — especially when it’s done with sensitivity to the nature of the disability that calls for this.”