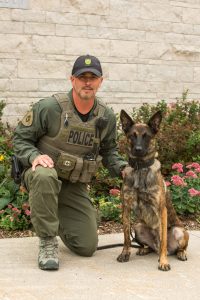 Young Kingston Police service dog Bask may look small, but his handler says his training and energy are proving that he’s up to fill the shoes of his predecessor.

“I think he’s going to be a great little dog,” Const. Jeff Dickson said, looking down at his new partner. A partner that, wearing the right collar, won’t move more than a foot away from him. “He’s doing very well at everything … he’s transitioning really well, but everything is new to him still. He just came from Poland to North Carolina, then to here.

“He’s bonded well with me, and every day he seems to be getting stronger and levelled.”

Bask is a 17-month-old Dutch shepherd-Belgium Malinois cross. The breeds ensure he’s obedient, strong and fast and up to any task … as long as they get a ball at the end of the day. “They’re very high-energy dogs,” Dickson said. “A shepherd will chase a bad guy around a car, a Belgium Malinois will jump over the car — very high-energy, very athletic dogs.”

Dickson first met Bask in August down in Harmony, N.C., where he’d already been in training with Highland Canine Training for 16 weeks. Dickson then spent the next month at the facility getting used to Bask and bonding with him.

“We learn how he tracks, we learn how he does building searches, because it is a little bit different than the Canadian side. They train them a little different up here,” Dickson said. “They do more trailing down there where the dog’s head is up, whereas Canadian dogs track with their heads down.”

While Dickson is working with Bask to keep his head down while tracking, he is also trained to do article searches, apprehension and handler protection, building searches and drug detection. Bask is now available to be called in for service should a serious incident arise, but for the next eight weeks, Dickson will continue his training.

Like his predecessor, Zeus, Bask’s reward for good work is his ball, Dickson explained.

“They have high ball drive,” Dickson said. “They’ll work, do anything for us just to get that reward.”

During budget negotiations in November 2019, Kingston Police decided to delay replacing police service dog Titan after Const. Mark McCreary retired with him earlier that year. This past spring, when Zeus was diagnosed with cancer, the force started to shop for a second dog again, just in case.

After Zeus underwent surgery to remove the cancerous tumour in his shoulder, he rebounded to his usual self, Dickson said earlier this week. The plan then turned to Dickson training both dogs and Zeus retiring at the age of 10 in the spring.

Unfortunately, Zeus had a tumour growing on his heart, too, unrelated to his previous cancer diagnosis, that no one knew about. He died suddenly Sunday evening when it burst.

“Although Zeus has left incredibly large paw prints to fill, we are excited in welcoming this newest addition to our Kingston Police family and look forward to the continued success of the canine unit program,” Kingston Police said in a news release.

Bask’s first incident was the Ford Street standoff on Sept. 23 alongside Zeus. Dickson said there’s no doubt Bask would have learned a thing or two from Zeus that day.

“He got along with Zeus really well,” Dickson said, looking down at Bask again. “He’s got massive shoes to fill … no titanium teeth yet, eh buddy?”