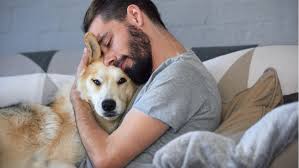 Just as our pets often help their owners through difficult times, animals that have suffered from traumatic events may need extra support.

Dr. Lori Teller, an associate professor in the Texas A&M University College of Veterinary Medicine & Biomedical Sciences, says that because dogs can suffer from psychological conditions like their human counterparts, owners can benefit from having an awareness of possible causes, diagnosis and how canine post-traumatic stress disorder may be managed to give their furry friend the best life possible following periods of stress and trauma.

Roughly 5-17% of dogs are affected by canine PTSD, but because the condition has only been recognized in dogs within the past 10 years, Teller says there is still much to learn.

“We don’t always know what may cause PTSD in dogs, but some potential causes are military or police work, being a bait or fighting dog, being raised in a puppy mill, severe abuse, living as a stray after being abandoned, trauma from a disaster (flood, fire, earthquake, tornado, explosion), or being attacked by other dogs or animals, Teller said.

“The symptoms of PTSD in dogs are similar to those in humans and include chronic anxiety; hypervigilance; avoidance of certain people, places, or situations; sleep disturbances; fear of being alone; decreased interest in a favorite activity; or aggression,” she said.

Teller also says that these symptoms may not be apparent at the time of adoption because as a survival mechanism, some dogs will mask their symptoms until they gradually adapt to their new home, depending on the animal’s trigger.

Pet owners who suspect their furry friend may be suffering from this condition should ideally seek help from a veterinary behavioralist, who will develop an appropriate treatment plan. Pet owners seeking this care may wish to reference the American Veterinary Society of Animal Behavior’s directory.

If access to a veterinary behavioralist is not possible, your primary veterinarian will still be able to help your dog get the care they need.

“The best ways to manage PTSD in dogs will be a combination of behavioral therapy and medication,” Teller said. “Behavioral management might include desensitization therapy, in which a dog is exposed to low levels of stress, and then this level is gradually increased to build tolerance for that stimulus, playtime with a well-socialized dog, increased exercise, and mental stimulation. Medications prescribed could include anxiolytics, anti-depressants, or beta-blockers.”

Teller adds that time and patience are vital to the management of canine PTSD. Owners will need to actively work with their dog on a daily basis and be in regular communication with their veterinary team.

Although adopting a dog with a history of trauma requires a caring and dedicated owner, the bond that is formed between a rescued dog and owner can be a gift that is well worth the time and effort.