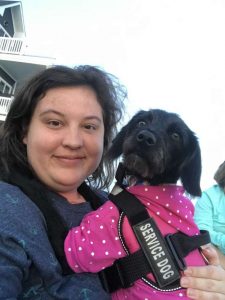 It’s happening more and more often — nearly every time Milford resident Kara-Anne Canfield is in a store with Stella, her service dog, other dogs distract Stella, according to Canfield’s mother Sandy.

This can result in a life or death situation for Kara-Anne, 30, who suffers from mast cell activation disease (MCAD). Sandy Canfield wants to raise awareness to this issue and her daughter’s condition.

“We have been faced, over and over, with many stores that are allowing pets to come in, and it causes our service dog to be distracted,” said Sandy, adding sometimes the pet dogs nip or bark at Stella, a poodle and Basset Hound mix. “I’ll ask for the manager and I’m told no pets are allowed, but they won’t ask a customer if it’s a pet or service dog,” she said. “My goal as a mom is to spread the word about the disease and about service dogs.”

According to the ADA, businesses must allow people with disabilities to bring their service animals into all areas of the business where customers are normally allowed to go. Typically, restaurants, stores, and other businesses with a “no pets” policy must make an exception to the policy when a customer has a service animal. In addition to MCAD people with diabetes, ALS, epilepsy and numerous other serious conditions also have service dogs.

When a person has MCAD, their mast cells — which serve as a defense system in the body — overreact, which causes an allergic reaction. Stella is trained to detect Kara-Anne’s histamine level. Histamine is an organic compound related to the body’s inflammatory response. Elevated histamine indicates an allergic reaction. Kara-Anne’s reactions can range from hives to full anaphylactic shock. Triggers that can cause her histamine level to rise include cleaning supplies, hand sanitizers, cologne, soap, body spray, and mold.

Stella is trained in scent. If she smells a trigger, she alerts by blocking Kara-Anne, and then pulling her out of the environment. When Stella alerts, Kara-Anne has rescue medications to take to prevent the anaphylaxis from coming on.

Sandy Canfield said while Stella has greatly helped improve the quality of Kara-Anne’s life, she is now faced with the problem of running into other dogs everywhere she goes. There seems to be dogs in stores more often than ever these days — and store owners are allowing it, she said.

“It’s hard for me to navigate around the store when there are other dogs in the store, since it’s hard for Stella to work when she’s distracted,” Kara-Anne said.

According to Kara-Anne, when Stella is distracted, she will “stop sniffing around, and will start looking around and will get nervous.”

“Thank God Stella is a rock star dog,” Sandy Canfield said. “But God forbid she misses an alert and it happens to be one that could have saved Kara-Anne’s life.”

Kara-Anne was diagnosed with MCAD when she was 11. Her reactions to triggers for the disease vary widely.

“It was never cookie cutter,” said Sandy, who, along with her husband Scott, have two other children. “She could be having a conversation and then go unconscious, or sometimes she will sound like she has marbles in her mouth. Other times, she gets hives, or her throat will just close up.”

To help control the disease, she receives a monthly injection. When she does have a reaction, sometimes she requires an EpiPen or Benedryl.

Kara-Anne gets reactions as often as three times a week. As a result, they have completely prevented her from leading a normal life, according to her mother.

“Her childhood was robbed from her,” Sandy Canfield said.

She had to leave St. Ann’s middle school in Milford due to her condition, and received private tutoring at home. She returned to school in the eleventh grade, attending Foran High School. The Board of Education supplied her with a one-on-one nurse at the time.

“I went to school with her for two-and-a-half years,” Sandy Canfield said. “I drove her every day and I sat outside every class she took.”

“The reactions got less and less,” Sandy said. “We had a good medication plan going.”

Kara-Anne got a part-time job, a driver’s license, and started driving the 30 minute commute to school by herself. She became an occupational therapist for the Stamford School System. After three years, her symptoms returned and she started getting serious reactions again — and going into shock.

“It happened four times within a two-week period,” her mother said. “One time, she was driving when it happened. She has not driven since.”

Kara-Anne had to resign from her job and is now on disability. She has used a walker since August of 2019 and the dog has not left her side since. Since the pandemic, she has gone into shock a total of 25 times, Sandy said

“If I can get one person to leave their dog at home when they go to a store, I’ve accomplished my goal,” she said.