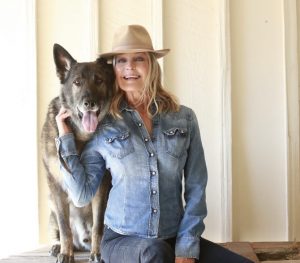 There’s only one Bo Derek, the actress who shot to superstardom in 1979 after appearing in 10, followed by Tarzan and Bolero in the 1980s. Thanks to memorable appearances on such TV talk shows as The Tonight Show Starring Johnny Carson, Late Night with David Letterman and the Arsenio Hall Show, in addition to being in films like Tommy Boy, the iconic celebrity continued to be a household name through the ‘90s.

Derek made her first foray in the pet care industry in 2000, when she launched Bless the Beasts, a pet care line (shampoos, conditioners, pomades and fragrances) that was exclusively available in Petco stores. She redeveloped the pet grooming line, rebranding the name to Bo Derek Pet Care, and released a shampoo, conditioner and tearless face wash in 2017. The products are currently available in select pet boutiques, grooming salons and other brick-and-mortar stores.

This past July, Derek appeared on talkshoplive, an e-commerce platform that enables the public to interact with celebrities—including Garth Brooks, Alicia Keys and Julie Andrews—and shop small businesses via a live video stream. It was Derek’s first time hosting a segment on the platform, which saw her bathing her dogs outside a horse stall on her California ranch while answering questions from viewers, several of whom appeared to be regular customers who she knew by name.

During the talkshoplive segment, Derek detailed the ingredients, which include such exotic botanicals as meadow foam oil and amino acids that nourish, soothe and protect the pet’s coat. According to Derek, the product line features a signature fragrance that’s “specially formulated to neutralize canine malodors, not simply mask them.” This is Bo Derek, who possesses a genuine passion for animals, including her dogs. I had the opportunity to speak with Derek on several occasions since her talkshoplive appearance to learn more about what inspires an iconic celebrity to design a line of pet grooming products and make it available to independent retailers. BD: It went really well. We sold well. The people who were asking questions were great. It was a little complicated. Instead of sitting at a computer screen and reading questions, which most of the hosts do, my sister was reading the questions off my iPhone and throwing them at me. I’m trying to wash my dogs at the same time, and my dog was trying to bite my horse. It was a little chaotic, but that’s part of the fun. It was fun being on camera with my dogs Chico and Smokey, we were lucky with these two rescues. They have their “things” and rescue dogs come to you older, but they’re great dogs. I have three big German shepherds, and that’s a lot of dog. In the past, I’ve had a dozen dogs, but right now I have three.

BD: With the formulations and production, I’ve always been with Cardinal Labs. The first time I got into this business was quite some time ago. This journey started about 20 years ago when I was working with a perfume/menswear designer named Bijan, who was a friend of mine. Michael Jordan and I were doing a campaign for Bijan and, in the process, I found my partner in this business, Gene LaPorte, who was working with Bijan. We hit it off, and Gene was the one who took me to Cardinal Labs and [Cardinal CEO] Tony de Vos.

The Cardinal Labs plant [in Azua, California] is solar powered and clean water, and they’re great people. They’re so much fun to work with, and they’ve always been very patient with me.

From the very beginning, Tony’s been great. The quality of ingredients and product is superb. It’s been so consistent. And he’s fun to work with. He’s always got so much going on, and he’s an energetic, full-of-joy kind of guy.

I’ve learned so much from Tony. When I first visited the plant, he and I were walking through it and talking about the pH of a dog and talking about ingredients. I told him I wanted the best ingredients and that I didn’t want to throw money at something that doesn’t make a difference. He was the one who told me that some products are just industrial strength ingredients and there is a difference, so we started playing with the formulations. You can tell, you can tell right away. And when you’re rinsing the dog, you can tell that it’s coarse and doesn’t feel good.

I remember in the beginning he told me I’ll never make any money with just a line of shampoos. [she laughs] You know what? He’s right!

BD: You want everything to be natural today, and this is an example of using the latest in science in grooming products but it’s not a chemical. It’s taken a long time, but these products were really made for me trying to keep the dogs in the house with me.

When I got into this and worked with Cardinal Labs, I learned that most shampoos aren’t even pH-balanced for a dog. Tony and the Cardinal chemist taught me about cationic and anionic, which is not uncommon but is just another added expense in product production. Products can say “natural” and all these things, but it doesn’t feel good on the dog.

The tearless face wash is good for even puppies and kittens. It’s super gentle. You could say it’s like baby shampoo for puppies and kittens. You’ll find some tear stain removers and facial wipes, but I needed something to clean my own dog’s face, and a damp sponge isn’t going to do it for my dogs when they put their face in manure.

BD: The product formulation today is different, and there are more natural ingredients in today’s product. As for me, my experience in 2000 was very discouraging. But I think what’s different now is the time I can personally give to the company. I’m fulfilling orders right now as we speak. And I’m involved in all the social media promotion of the company because I have the time. I’m personally hands-on involved in the company. In 2000, I wasn’t. I had investors. I had a marketing person. It was very different.

When my products hit the market in 2017, it was as a small, family-owned company. It’s me and my sister. We do it all. My niece has a social media company, and we hired her for a few months to get us going. But my sister and I do it all. It’s great. The people I meet and the contacts I make are really fun. But when you’re manufacturing in small batches as we are, it’s really expensive. But Cardinal Labs can bump up my production at any time.

I do have opportunities to use my name in more of a licensing capacity. There are investors who want to come in and make it a good, financial, “let’s make a lot of money” thing, but I would lose control. This is what I care about, and I feel good about it. I’m not going to change the formulations. It’s super concentrated, but that’s so they last a long, long time. I have three dogs, and it would be depressing if I used up one bottle every time I washed my dogs.

And so many other things have happened since 2000. People’s relationship with their pets has changed. Twenty years ago, there were more backyard dogs that got a bath only once a year. Pet grooming products are more important now and are part of our lifestyle now.

It was funny, when I did the ESPN show, we were talking and one of the show’s hosts asked if I thought his getting a blueberry mask facial for his dog was too much. It shows you how it’s different, and pets are now part of our family. I have more customers today because people want to spoil their dog, and they want their dog to smell and feel good and not have skin allergies.

BD: I enjoy being able to give away product to various charitable causes, particularly military dogs on deployment.  I like to help military working dogs. They’re doing us all a service. I want the dog to have a happy life with their handler, and I don’t want the person to have to pay vet bills and food bills and have it be a burden.

Even before 9/11 I was aware of these working dogs. I got my first protection dog, which was bred and trained by the same people who train military working dogs. I grew up with dogs and horses, and thought I knew a lot about them. I got to learn a lot from my trainer, Howard Rodriguez, who trains protection dogs. I found the training so fascinating—the breeding, the intelligence of the dogs—it’s a dog bred and trained just for their service. I found them to be very friendly dogs, but when you turn on that switch, they do their job.

Then 9/11 brought it everyone’s attention, no matter what we do and spend in our defense department, these dogs do what no machinery can in saving lives. The wars in Afghanistan and Iraq, dogs were so important.  I have wanted to help these dogs for so long. I admire them and the people who train them.

When we started up the company again, I felt that was a natural place to support. There’s one charity that sends gift boxes for military dogs. I’ll send 200 bottles of shampoo, and it goes to dogs all over the world on deployment, and that’s in addition to the financial donations. Some of the handlers will post pictures from an undisclosed location of a dog getting a bath with my bottles of shampoo, and it makes me very happy. BD: I think the product will definitely perform for them. We’re offering them something that they’re not going to get with the big chain stores. And I’m here to support the products.  I’m the one opening and personally answering all the emails. I’m talking to people every day. I’ll go into stores like Muttropolis—it’s like a community gathering place. I’ll watch the customers and interact with them. I truly stand behind the products.