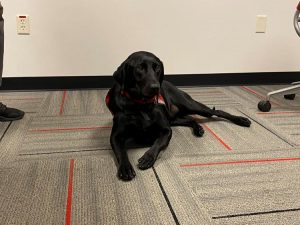 Entering her second year as Illinois State University’s favorite ‘pawfficer’ from ISU’s police department, Pawfficer Sage and the Community Engagement unit is taking advantage of connecting with students, faculty, staff and community members as much as they can amid the pandemic.

Despite the spring semester being cut short and students being sent home due to the coronavirus, Sage’s first year as ISUPD’s new recruit was successful for her and the department.

She attended over 100 events and bonded with about 9,000 students, faculty, staff and community members since joining the team last fall. Additionally, ISUPD officers have handed out over 5,000 Sage badge stickers at these events.

However, bonding with the ISU community has been harder for the pawfficer with the virus and health guidelines in place.

“Because of COVID, frankly, a lot of the [residential assistants] and people that will call us, they’re unsure about what they can do within the university’s safety guidelines regarding COVID-19.”

After students were sent home and the department reduced the number of staff members coming into its location in the Nelson Smith building, Sage was able to stay with the deputy chief for some time.

“The deputy chief has two dogs. She would also go home with one of our detectors or even meet here with his dog who is also a black lab. They really love each other, so she’s had a few playdates [as well],” Gardner said.

Since Sage has come back to the Nelson Smith building from her stay with the deputy chief, Gardner explained the steps and guidelines put into place when the Community Engagement unit and Sage attend events and socialize with members of the community. He put emphasis on how the unit wants to avoid using Sage as a transmission device.

“We also have a request from her vet that when we go to these events now before somebody pets her, they sanitize their hands before they pet her. [This] way, we don’t use her as a transmission device,” Gardner said.

Initially being trained as a service dog through Supporting Independence through Teamwork Service Dogs, Sage made the transition to her job with ISUPD after trainers thought she was too social.

ISUPD Chief of Police Aaron Woodruff said that she’s continuing to live up to her mission of helping officers with educational programs and students adapt to campus and offering comfort and support to crime victims and students at various on-campus programs.

“If there’s some housing events, things where the group sizes [are small and] smaller group events is what it will come down to,” Woodruff said.

“I know [in previous weeks, we have] had some impromptu meetings with students just out on the Quad, so those things can still happen. They may not be formal events, but you know you still have interaction, some positive interactions and in other venues.”