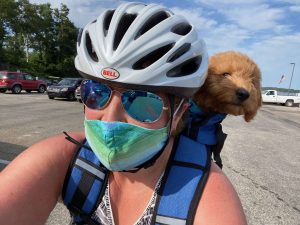 Karen McCullough never wanted a dog. “It would have tied me down, and I had a great, very busy life,” she says.

Her career as a keynote speaker at conferences has taken her across the U.S., Canada and Mexico. “My job is to get everybody engaged, excited and ready to network,” she says.

McCullough loved the travel — “cool hotels and not worrying about having anything at home,” she says. “I don’t even have any live plants in the house.” As she sailed into 2020, she expected her best year yet.

Then “BOOM” — everything stopped, including conventions and conferences. The pandemic “took my life away,” she says.

Living alone in Houston, she started feeling the stress — anxious and worried about money. On top of that, she couldn’t see her three grandkids who live nearby. “I’m such an extrovert and it’s just been crazy and hard.”

The surprising solution, for McCullough and many other Americans in 2020, was often furry, with four feet: a pet dog or cat.

First, her son and his wife adopted a puppy. McCullough decided to do the same, quietly hoping that if she got a puppy, the grandkids “would want to come and visit me in the front yard.” On Labor Day, 8-week-old Rosie, a Wheaten terrier, arrived.

Rosie opened a new world to McCullough — within just a few blocks. Strangers became new friends. “I know all my neighbors now,” she says. “We have a routine and she gets me out there; we walk three times a day!”

The loneliness that had started to sink McCullough as the pandemic wore on is gone. “Rosie has been like this magnet; she’s attracting me to people and it’s good.”

And there’s some science to back up McCullough’s feelings. Research from Australia finds the “pet factor” does bring people together in helpful ways: Pet owners are more likely to get to know people, form friendships and get the social support humans need.

Psychologist Lori Kogan, a professor of veterinary medicine at Colorado State University and chair of the Human-Animal Interaction Section of the American Psychological Association, has been cataloging stories like McCullough’s during the pandemic.

Kogan and colleagues from Washington State University, University of San Francisco and Palo Alto University did two anonymous online surveys via social media to current pet owners — one regarding cats and another asking about dogs. The surveys asked participants to share their thoughts, experiences and concerns amid the pandemic.

They found a significant number of people reported feeling they have less social support from friends and family now than before COVID-19 spread across the U.S. For many, their pets have played a critical role in helping reduce feelings of depression, anxiety, isolation and loneliness in these tough months.

Pets, Kogan says, are “a respite from the difficulties of life” and provide their human companions “an outlet to give.” And while relationships with friends and family can be fraught, she says, “relationships with animals are simple.”

Here are more stories of pet owners discovering animal companions can be the unsung therapists of these difficult times:

Get up and get moving: Dr. Gregory Brown and Kai

Dr. Gregory Brown is a psychiatrist in Austin, Texas, and a spokesperson for the American Psychiatric Association. Brown says he has been seeing an increase in anxiety, insomnia and depression among patients he has counseled in the past six months. “People are definitely dealing with economic stressors, a hard time with money, and with just being idle” — not getting out of the house much.

A dog “nudging at your foot or barking because they want to go for a walk” can be a real motivation every day to get out and get moving, he says. And that’s good emotionally as well as physically. “We know physical activity can help reduce depression.”

Though Brown says he’s a fairly active guy, he found the reduced structure of these pandemic days meant he was getting to bed a bit later, getting up a bit later and sometimes letting his exercise schedule slide.

Then, about a month ago, he and his wife decided to adopt a 10-month old golden retriever/lab mix named Kai. Now, every day starts with her wake-up bark around 6:30 a.m., returning some sense of structure to their lives.

And Brown says that he spends at least some time outside daily, jogging and walking and that helps make the days seem “a bit more normal.”

“She’s just been a joy to be around when she’s not busy eating up my wife’s favorite pair of shoes,” he says.

As a psychiatric social worker in Rockville, Md., Karol Kullberg has spent most of her work life in a small room, listening to patients face to face — work she finds rewarding and fulfilling, she says. When the pandemic hit, she was able to work from home — a blessing in some ways, but not others. Offering therapy online, via telehealth appointments, has been convenient, Kulberg says, but she also finds it isolating and somewhat alienating.

“It’s intensely stressful — I think for everyone,” she says. “Certainly for patients as well as therapists, who weren’t particularly technologically adept or even comfortable using Zoom or other platforms.”

Reading patients’ facial expressions and body language can be more difficult she says, and without colleagues to talk to in between therapeutic sessions, “you’re very aware that you are suddenly working in a vacuum.” Kullberg doesn’t say she’s lonely. She says it’s more like being “profoundly alone.”

By the end of March when it became clear that staying at home would be the norm for quite a while, she decided to adopt a dog.

Enter Molly, a 5-year-old terrier mix who “came right into my home, was perfectly well-behaved, perfectly housebroken, and even welcomed my cat — who didn’t return the favor.”

She finds Molly an extremely comforting presence, “like having somebody’s arm around your shoulder without having to say anything. Sort of like a dance partner you don’t have to teach; they just figure it out.”

Today, Kulberg says she no longer feels alone. “I get up in the morning and Molly curls up in her bed and we go to work.”

“My glorious chow chow mix died at the end of January and I was heartbroken” says Peggy Pacy, who initially planned to let some time pass before getting another dog. But, “a heart needs to love,” she says, “and I started looking.”

At the end of February she adopted a large and fluffy Great Pyrenees mix — she named him Emmet. It was just before lockdown in Washington, D.C., where Pacy lives and works as an independent producer of commercials. Emmet arrived “just in time” says Pacy, who lives alone. “No question, it’s very easy to go down the dark path in the world we’re in today.”

Early on in the pandemic, the first three minutes of every morning would start with a “mild panic” she says. But then a “giant white paw lands on my shoulder and I wonder if it is possible to literally feel serotonin,” she says, referring to one of the neurotransmitters thought to help stabilize mood.

Emmet spends much of his time chasing flies, unearthing clothing Pacy had forgotten she owned, and making friends with neighborhood kids — just watching him is diverting, she says. “All day long the kids drop by and yell for Emmet.”

Even in times of despair, Emmet makes a difference. “I’m standing in my front hall, lost in thought … wondering if I will ever work again, if my small business loan will be approved, if I will have to sell my house. And then, gazing in the direction of my couch, Emmet decides that a long slow back flip to the floor is in order.” His antics pierce the grief and remind her to stay in the moment, she says — ” be grateful for what I have.”

Pacy has a Post-it on her door that says: “I have health insurance; my cabinets are full of food; I have a home; I have Emmet. This makes me happy.”

Devin Green, a small business consultant and life coach, who lives in Portland, Maine, started looking for a dog to adopt in May. After many false starts, a close friend helped her find the dog of her dreams, a miniature goldendoodle (a cross between a golden retriever and a small poodle).

Taco has “changed my life in ways I never expected,” says Green. As he grows, his puppy fur is getting replaced by adult dog fur which can get matted. So Green brushes him nightly, giving — and recieving — needed physical touch. “If I’m having a bad day, he’s very warm and snuggly.”

She sometimes struggles with anxiety, she says, and soothing the pup’s needs helped her get beyond that. “I’m consumed with him more than the worries in my mind,” she says. “My brain space is now taken up by something far more productive than it used to be.”

Green says she used to panic a little if she didn’t have plans for the day, but Taco has introduced her to the neighborhood and helped her feel more a part of the community. Every morning, they walk to the nearby fire station — a big loop, Green says. “The fire station is his favorite place.”

Taco runs inside and “loves on all the firefighters and they love him back. I had never even spoken to any of them before but now we’re all buddies.”