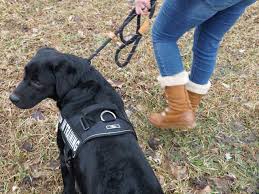 Students in South Lyon are getting a furry classmate.

Olive, a 7-month-old black Labrador, is expected to join students at South Lyon East High School this fall, an unconventional addition to enhance the educational environment.

Students and administrators alike are anticipating the gain of their furry friend, who is currently in training to be a good citizen at Green Acres Labradors in Highland Township.

“I believe we have so many students that deal with anxiety and depression and we’re excited to offer support that is not as conventional,” Katey White, a guidance counselor at South Lyon East, said. “For some students, I see this as a tool to help them get through the door every morning. Just having an animal to touch and is soothing can help a mood. Dogs don’t judge you, they don’t have opinions, and they just give you unconditional love.”

The trend is catching on. While many schools, including Novi, Huron Valley and Birmingham, bring in therapy dogs for visits with children, a district that owns its own dog can expect it to be present all school day, wherever in the building it may be needed, as well as available for school events like parades or football games.

Olive, who comes with a price tag of $10,000 after training is completed, is paid for not from the school budget, but by donations, including $5,000 from the South Lyon Educational Foundation, as well as $2,000 from the Class of 2020. Other businesses and individuals are also contributing funds and goods and services for her long-term care, including a local veterinarian and pet supplies store.

Michelle Tomei, SLEF chair, said the foundation had been looking for a way to make a big impact in the district when she learned the school board was considering Fisher’s proposal to get a therapy dog. Olive, Tomei said, is the perfect way to have a grand, far-reaching impact.

“I think this will make a difference in a student wanting to go to school and being more comfortable at school,” she said. “When you bring a dog into school, the whole dynamic changes, the atmosphere changes, kids are calmer and more excited… A dog will be putting a lot of students at ease… I’m really hoping therapy dogs make it easier for students to talk to their counselors.”

Tomei noted that having a therapy dog at the school could have been a comfort to students grieving after Trevon’s death.

When Olive arrives this fall, her base will be in the South Lyon East counseling office, but she will be moved around the building as needed and will have time off during the school day to rest. She will live with a staff member who has not yet been named.

While Olive will primarily be at East, Fisher said there is flexibility to move her around to other schools in the district.

“I think it would be amazing to put a dog in every building, it just depends on their needs,” Fisher said. “Other buildings (staff) have said, ‘If you get this approved, we want to be next.’”

Assistant Superintendent Ben Kirby said there has certainly been successful implementation of therapy dogs in school settings, and he expects to reap the same benefits as other districts that are putting this in place.

As the district’s inaugural dog, Olive is considered part of a pilot program at one building.

“We will see what the impact is and what challenges are presented and how we overcome those challenges and that will determine what it looks like,” Kirby said.

Olive will be kept apart from students with allergies or a fear of dogs, although there is also the hope that she may help some students overcome their fear.

Kirby said the district does not yet have a long-term strategy as far as dogs, but “it doesn’t mean we might not go there.”

Administrators plan to collect data and are also hoping the community is supportive.

“It is exciting, the prospects of being able to serve children and having a dog to help students,” Kirby said. “There are enough situations that occur during a school day that we know there will be a positive impact from having a dog.”