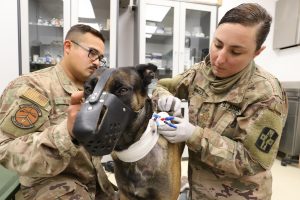 When an Air Force working dog suffering a heat injury in Saudi Arabia needed a blood transfusion, he got it from a Navy dog named Army, in what officials are calling a joint service lifesaving effort.

Cvoky, a 120-pound Belgian Malinois, was rushed by helicopter from Prince Sultan Air Base to Kuwait’s Camp Arifjan earlier this month, after his temperature reached nearly 110 degrees — a potentially life-threatening situation — the military said in two recent statements.

“He did not seem like himself” during a training event on June 9, said Cvoky’s handler, Air Force Staff Sgt. Juan Reyes, in a statement a few days after the incident. “We rushed him right to the medical tent.”

In recent years, a rash of heat injuries among the troops — some fatal — has plagued the military, which last year saw its first decline in such cases in five years. Still, more than 2,000 troops suffered heat exhaustion in 2019 and some 500 had heatstroke, a military report said in April.

At the Saudi air base, 5-year-old Cvoky was treated just like a human would be — taken out of the heat and cooled with ice, said Maj. Valentina Merola, a public health officer there, in a statement issued last week.

While common for both humans and canines during the hotter months in the Middle East, heat injuries can have severe and lasting consequences for dogs, such as internal bleeding, said Capt. Jon Drake, veterinarian in charge in Kuwait.

“Many dogs that reach high temperatures like this one did, do not survive,” Drake said. “We were very lucky [Cvoky’s injury] was caught quickly … treatment was given right away, and we were able to medevac the dog.”

A UH-60 Black Hawk from the 1st General Support Aviation Battalion, 189th Aviation Regiment flew him to the Kuwait base, which was the nearest facility with the necessary veterinary specialists. The aviation unit, part of the Army’s Task Force Spartan, includes National Guard soldiers from Indiana and Montana.

“This is a first for us doing an international country transfer of a working dog,” said Chief Warrant Officer 3 Brett Milton, the pilot in command.

While the helicopter was in-transit, members of the Army’s 994th Medical Detachment (Veterinarian Services) in Kuwait readied for a blood transfusion, and Capt. Melody Mullin found the right donor with the appropriate blood type — the Navy dog named Army.

“We came in and he donated a pint of blood for the dog in need,” said his handler, Navy Petty Officer 2nd Class Sera Tamez. “It feels really good to help one of our own.”

Drake credited Cvoky’s handler with recognizing the need to act fast. That early recognition, as well as the joint service teamwork contributed to what Kimbrell called a “success story.”

“Cvoky is totally back to himself,” said Reyes, his handler with the 378th Expeditionary Security Forces Squadron, who deployed with the dog from Hill Air Force Base, Utah. “Right now he is just relaxing and enjoying life. This was definitely a happy ending.”

At Prince Sultan Air Base, where troops deployed late last year for the first time in more than a decade due to escalating tensions with Iran, working dogs are the “first line of defense,” said Tech Sgt. Erick Hernandez, the squadron’s kennel master.

Cvoky’s been in service for over three years and this was his first deployment, the Air Force said. Unfortunately, this was his second heat injury.

“More than likely, it will happen again, so once he’s treated and back healthy in Kuwait, he’ll return back to the states where he will retire from the military,” Hernandez said.