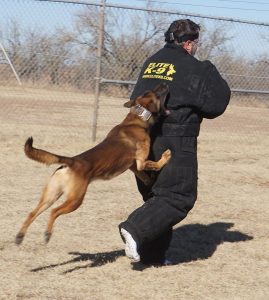 The silence is deafening as I stare into his eyes. He’s looking at me from 15 yards away, his gaze unwavering and I feel as if he’s staring into my soul. The suit I’m wearing is heavy and makes the thought of running a laughable idea. In my head I hear the faint whistle from the movie “The Good, The Bad and The Ugly.”

Like gunslingers we size each other up. Both waiting for the other to make a move. I wonder if his heart is pounding as hard as mine. Does he even sweat? I’m sweating. I’m facing off against a military working dog (MWD) and there’s a good chance I’m going to lose this fight.

Working dogs are trained to perform a wide array of tasks and skills. In addition to patrol and combat capabilities, military working dogs also are experts in detection and aiding military, homeland security and law enforcement officials in finding things like explosives and narcotics.

The military has used working dogs since the Revolutionary War, initially as pack animals to carry equipment, and later, for more lethal purposes, such as killing rats in the trenches during the First World War.

By World War II use of working dogs had expanded to support military operations. The military deployed more than 10,000 specially trained canines, most as sentries, but others as scouts, messengers and mine detectors.

Today, working dogs are serving with U.S. forces in Iraq and Afghanistan as patrol dogs and explosives and drug detectors. Nearly 2,000 more working dogs provide similar services at U.S. bases and military posts around the world.

Training for all MWDs and their handlers takes place at Lackland Air Force Base in San Antonio, Texas. The 120-day program, conducted by the Air Force’s 341st Training Squadron, teaches the dogs basic obedience as well as more advanced skills, such as how to attack and how to sniff for specific substances.

Once the dogs receive their initial training, members of the 37th Security Forces teach the dogs and their trainers to work as a team where the dog’s human counterpart will learn the dogs signals when it’s “hitting” on a substance.

From Lackland, the dogs and their handlers will be sent to bases around the world, including Fort Sill. Once here, the training of both handler and canine doesn’t stop, said Grosinky. The dogs will learn to ride in helicopters, staying calm during gunfire and more detection training as well as obedience. The dogs also will need continual practice in detaining a fleeing subject, commonly referred to in the community as bite work.

Bite work training for the dogs is how I found myself in a Kevlar suit playing chase on a sunny day at Fort Sill.

Lolek, a 4-year-old German Shepherd trained in explosives detection and patrol, is my adversary. He’s lying calmly at Grosinky’s feet, but there’s an air about him that seems to say, “you’re going down, son.”

I hear a whisper to my right telling me to run, and like a bull on roller skates, I turn around and begin my turbo waddle toward freedom. My knees and elbows are pumping for all I’m worth, but the suit is so heavy and cumbersome that I’m making little headway. I’m hoping I can outrun Lolek and amaze, not only these soldiers watching me but the world, with my swiftness. Deep down I know I’m not going to get away and my only hope is that I don’t wet myself in front of these soldiers and our readers.

I never hear the command to attack from Grosinky to Lolek, and even if I did, it’s in a foreign language to prevent others from commanding the dogs, so I wouldn’t have understood it anyway. I never hear Lolek coming either. I’m not sure if that’s because my heart is pounding in my ears or he’s gone into stealth mode.

I’m almost to the point where I think I’m about to win this race of fools when suddenly I’m struck by a fur covered missile with teeth. As I’m bowled over, I realize I never stood a chance against Lolek. He’s got me on the ground and while the suit is protecting me, I can only imagine what it would be like if I was a real criminal or bad guy in battle. This guy would make me wish I was never born.

With another command Lolek is called back to his handler and I’m assisted to my feet. I’m no worse for wear but humbled by the sheer power of the small dog. So we do it again. With much the same result in the end.

For Lolek, this is a game he’s played many times and will continue to play until his retirement. Depending on health and other circumstances, the dogs can work for many years. At retirement, the handlers themselves can opt to keep the dogs or they can be sent out to organizations to be used as service animals.