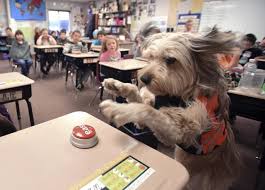 The School Committee is thinking of following suit with other cities and towns across the commonwealth by rolling out a therapy support dog program for at least one of its schools.

As Lynch explained, the idea first came from Erin Doak, guidance school adjustment counselor for Henry B. Burkland Elementary, who believes support animals would be very useful for the public school system.

Committee members clarified that this conversation was dealing with therapy animals, not service dogs for the physically challenged. Emotional support/therapy animals are for kids suffering conditions like depression, emotional trauma, grief or anxiety.

“Many of us here are pet owners. I can tell you they are therapy dogs for me,” said Lynch.

Lynch referenced numerous areas in the state, such as Hanover, Easton, Foxboro, and Framingham, that had similar emotional support animal programs in their schools. He even spoke to the Superintendent for Hanover Schools about the program. “The dog is more popular than Tom Brady wrapped in bacon over at Center School in Hanover,” said Lynch.

Under the program, an emotional support dog would remain in a designated area at the school until needed. When needed, “the dog isn’t running around. A handler is with the dog at all times,” said Lynch.

The plan would be to adopt from the National Education for Assistance Dog Services (NEADS), a Massachusetts-based nonprofit. The dogs trained under this organization are among the most disciplined available.

“Rigorous testing is done with these dogs,” said Lynch, who added that “Those dogs who don’t graduate, are given up for adoption, and those are already well-trained dogs.”

Committee Chair Rich Young explained Counselor Erin Doaks is also a dog trainer and is spearheading the effort to train and adopt from NEADS. Young added there are no planned expenses for the school district for this program since Doaks is fundraising for the costs associated with adopting a dog from NEADS.

“She’s not getting paid extra. There are no stipends. This is just something she believes will make a difference in the climate and culture of the school,” said Young.

Currently, the proposal is just for one dog at Burkland Elementary School and should be thought of as a pilot program for the district.