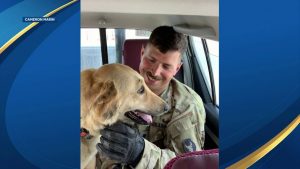 In this story, the term “man’s best friend” takes on a whole new meaning.

It’s a story about two very special pals, determined to stay with each other even if it means overseas flights, and one of them, going from wild and free to a new home that’s much more tame.

This is Sunny and Cameron Marin last March in Iraq, and this is them in Pittsfield, New Hampshire present day.

Their journey to the Granite State is a long one. They first met while Cameron was stationed in Iraq with the New Hampshire Army National Guard.

“There was rough times, there’s times that weren’t great, but it’s all just part of it,” said Cameron. There’s little doubt Sunny brightened his days.

Cameron says stray dogs were frequently around their work, but most of them skittish, unlike Sunny.

“He just comes sprinting up to me and just immediately lets me start petting him, no questions asked, didn’t hesitate at all. Just super friendly,” said Cameron.

It wasn’t long before Cameron was giving Sunny treats.

They became close enough that Cameron reached out to SPCA International. They started the process of getting Sunny back to the Granite State.

But COVID-19 shutdowns made it tough. Sunny finally landed in the states in August.

“Seeing that plane touch down and come down the runway was amazing, and you finally feel like you can exhale at that moment,” said Meredith Ayan, SPCA International.

Sunny made it home before Cameron and when they reunited, it didn’t take Sunny long to recognize his old friend.