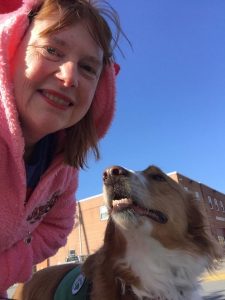 Every afternoon along Fairview Avenue, past the Manassas Police Department headquarters, and into Downtown, Sandy O’Bannon walks her dog, Indiana while wearing a pink bunny suit.

In the wake of the coronavirus outbreak, O’Bannon said she continued to walk her dog daily. She added the pink bunny suit to bring cheer to passersby.

“I chose a bunny costume because it’s close to Easter,” she said.

O’Bannon starts her route early in the morning between 7 and 7:45 am and repeats it again in the afternoon after 4 o’clock.

She always gets positive feedback from people during her walk.

“Some have even told me that I’ve made their day,” says O’Bannon.

O’Bannon started wearing the bunny suit after St. Patrick’s Day when communities began social distancing due to the spread of the coronavirus. There are five cases of the disease in Manassas, one in Manassas Park, and 56 in Prince William County of today.

Two days ago, the disease claimed the life of a hospitalized man in his 70s who lived in Prince William County.

O’Bannon has lived in Manassas for over 30 years and has worked for the Prince William County Department of Mental Health Services since 1988. She is also the secretary of Manassas Therapy Dogs, whose mission is to offer pet therapy to residents of Manassas and surrounding areas.

“Our partners are trying to come up with creative ways to spread smiles and joy during this time,” says O’Bannon.

O’Bannon said she and her four-year-old English Shepherd, Indiana (named after the main character in the Indiana Jones films) work as a team to bring joy and comfort to others. Indiana is registered through the Alliance of Therapy Dogs, and a partner to Manassas Therapy Dogs.

The Alliance of Therapy Dogs is the international registry of certified therapy dog teams.

“We attend libraries, police stations, assisted living facilities and schools with our therapy dogs but due to social distancing, we can’t perform our normal visits,” said O’Bannon. “I thought what can I do to bring joy and smiles to our neighborhood? I love dogs and encouraging people.”

O’Bannon said she dresses in the suit to build a sense of community and joy. A fluffy bunny and a bow break down all types of barriers, allowing people to instantly feel more comfortable around her, she said.

O’Bannon said she wanted to figure out a way to use her therapy dog to perform social distancing in an appropriate way.

“There’s a lot of things we don’t have control over, but there are some things that we do,” she said, “We should have gratitude for the people out on the front lines – this is my contribution.”

O’Bannon lives in the Oakenshaw neighborhood of Manassas where she has been since 1982 with her husband, Randy. She has raised her three adult kids in this home and will be celebrating her 60th birthday on Sunday, March 29.

“We’re having a driveby birthday party,” she said, “Family and friends will just drive and walk by and wave.”

O’Bannon said she has always enjoyed dressing up in costume.

“I also do races like 5Ks and half marathons,” O’Bannon said, “I’ve dressed like Han Solo to tribute Star Wars in past races. With all the races canceled, I still wanted to dress up.”

O’Bannon said she is wearing the bunny suit now but plans to transition to other costumes as the weather gets warmer.

“If I can bring a smile to someone’s face, I’ll dress up in a bunny suit any day,” said O’Bannon.