Man Saved By Prayers And His Dogs 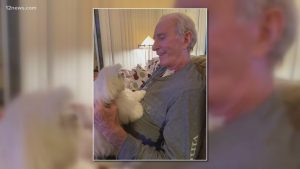 A Scottsdale man who survived a long, hard battle with COVID-19 said he was saved by his family’s prayers and his dogs.

Dennis Lauchner, 67, had never had any health issues before. He said that’s why he didn’t take COVID-19 seriously. Until it almost cost him his life.

He never thought his family vacation near San Diego, would end with him fighting for his life against the coronavirus.

“I was about as close to death as possible,” Dennis said.

On July, the Lauchner family left Scottsdale for Coronado, CA. By that night, Dennis was admitted into Sharp Coronado hospital with breathing problems. After two weeks in the hospital, his family got a devastating call from a nurse.

“She said would you want to see him? Because this will be the last time,” said Katee Lauchner, Dennis’ wife.

“It took over my entire body. Every vital organ except my heart shut down,” said Dennis.

“We told him how much we loved him, we told him keep fighting, not to give up,” said Lauchner.

The Lauchner family kept that promise. Katee organized prayer sessions every night at the beach, while Dennis was in the hospital, paralyzed as a part of proning therapy to help him fight the virus.

“If it weren’t for my wife, my daughter I don’t think I would be here. And my dogs,” Dennis said.

His two certified therapy dogs Coco and Cici got to visit him when his family couldn’t.

“They were as excited to see me as I was to see them,” said Dennis. They helped him get his mind to a more positive place.

“It was a sense of normalcy,” said his daughter Jessie Robinson.

After 45 days, Dennis was released from the hospital COVID-19 negative. His nurses and family cheered him on when he was released Monday.

He said that he still has a ways to go before he’s back to normal.

He still goes to the hospital for blood tests, and his relearning how to walk, but is excited for the journey ahead.