Life With A Service Dog 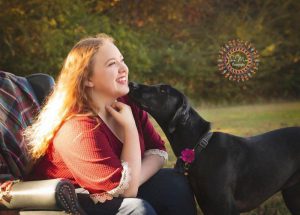 Riley Alberson is excited for graduation — and that her service dog is also being recognized.

Multiple seizures each day can result with her losing consciousness without anyone around to help.

She suffered a seizure and passed out in a bathroom at McAlester High School earlier in the school year and the door was too heavy for Tango the service dog to open it.

So Tango pushed Riley onto her side to help keep her air way clear until someone found them.

“The door was too heavy for her to do her job so she got behind her and pushed her on her side so she could do her job,” Riley’s mom, Amber, said of Tango.

Amber said the school district has worked to help accommodate them and prevent similar situations from happening in the future — adding “I feel like she has been very supported at the high school.”

Tango is a mixed breed dog and was trained at Therapetics, a nonprofit organization in Tulsa.

She can open doors, turn off lights, take off socks, get medicine, and even sneaks the TV remote away from Riley’s sister when needed.

Tango is by Riley’s side at all times — and on every Walmart trip she gets to pick out a toy that she proudly carries around the store.

The family said anyone is free to ask questions about Tango to learn more, but they hope others learn proper etiquette around service dogs.

Riley said people not used to seeing service dogs will often try to pet and talk with them — but they should resist trying to interact with them.

“People don’t realize that they’re working,” Riley said of service dogs. “Tango can’t help me if I have a seizure and she’s being distracted.”

“They get excited because you don’t usually see a dog in a restaurant or something,” Amber said.

Amber said doctors couldn’t figure out why Riley was in pain as an 8-year-old before development of scoliosis at age 11 led to blood testing that revealed the other disorders.

Riley said she avoided the pain as a child by spending recess sitting and talking with teachers instead of playing with the other kids.

“It wasn’t that I didn’t have friends, I just didn’t want to go and do anything and join the activities because it always hurt and I couldn’t always do them,” Riley said.

Riley still spends time with friends and reads lots of books — including some favorites such as the Harry Potter and the Lord of the Rings series.

Riley goes to Shriners Hospitals for Children in Shreveport, Louisiana, for treatment and only had to go once since restrictions were put in place during the coronavirus pandemic.

Her parents work at essential businesses so they’ve been concerned about potentially bringing the virus home with them.

Now Riley is preparing for graduation as MHS is set for a June 6 ceremony at a location and time to be determined if Oklahoma enters Phase 3 of Gov. Kevin Stitt’s Open Up Recover Safely Plan by then.

She has been accepted to Oral Roberts University and plans to become an anesthesiologist.