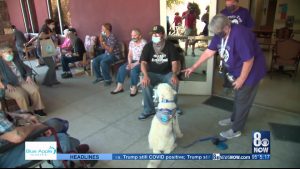 Therapy dog visits have slowly started to pick up again throughout the valley.

As you can imagine, pressing “pause” on a pet visit has been very difficult for all involved.

Kirsten Joyce caught up with volunteers with Michael’s Angel Paws.

At this time volunteers and their dogs have not been able to resume their normal visits at hospitals and schools, but we were able to visit with them at an adult daycare center in Henderson with COVID-19 protocols in place.

“Ari is about 10 years old, therapy dog for two years. She loves coming down here to meet you guys,” Keever says.

It’s all about creating smiles through wagging tails.

“We have about 300 teams that volunteer in Las Vegas, Henderson, and Boulder City, as well,” says Stephanie Gerken, executive director at Michael’s Angel Paws.

In March, Gerken made the difficult decision to stop.

“We do work with a lot of immunocompromised individuals, and we just didn’t want to take that risk,” she says.

But now more than ever, the love of a dog is needed.

“Just bring some joy during a day and a season when we all need a bit of pick me up, and need that interaction.”

“I know if I were hospitalized, or I couldn’t have my dog with me, I would appreciate someone bringing me their dog, so i could love on them, and pet them,” Keever says.

And these dogs know it’s time to get back to work.

“She found her place in life, this is what she does,” Keever says.

“They start getting so excited, because our therapy dogs teams when they go out have specific equipment, those dogs know when that stuff comes out, they get excited, they’ve missed the interaction with everybody,” Gerken says.

The nonprofit is always looking for volunteers. If you are interested in joining the group, you must attend a 12-week training course.