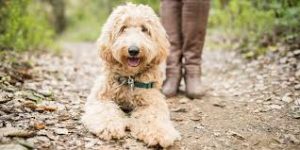 Labradoodles — the small, family-friendly crossbreed dog beloved by many a celebrity — is far more poodle than Labrador Retriever, a DNA analysis has revealed.

Researchers from the US studied more than 150,000 points along the labradoodle genome to determine how the breed has developed over the decades.

They found that changes in very few genes are capable of defining a new breed — and that many labradoodles also feature small numbers of spaniel genes as well.

Among the celebs known to have adopted labradoodles — raising their popularity — are actress Jennifer Aniston, golfer Tiger Woods and TV presenter Graham Norton.

Labradoodles — the small, family-friendly crossbreed dog beloved by many a celebrity — is far more poodle than Labrador Retriever, a DNA analysis has revealed (stock image)

Researchers from the US studied more than 150,000 points along the labradoodle genome to determine how the breed has developed over the decades. Pictured, Bradley Cooper, his labradoodle Charlie and Lady Gaga on the set of the 2018 film ‘A Star is Born’

‘We have used nuclear DNA markers to determine the genetic history of the Australian labradoodle and develop an understanding of how breeds stabilise traits given particular breeding strategies,’ the researchers wrote in their paper.

‘Our data shows that despite the major contributions from poodle and Labrador retriever, additional breeds contributed to the modern Australian labradoodle.’

These, the researchers explained, included minor contributions from spaniels.

‘Today’s Australian labradoodle is largely poodle with an excess of poodle alleles related to coat type.

‘This study demonstrates that changes in very few genes can define a new breed and demonstrates how breeds can form in a small number of generations.’

The labradoodle is an example of a so-called ‘designer breed’ — one intentionally bred from two purebred dogs with the goal of combining positive traits from the parent breeds while avoiding the health problems that can impact some crosses.

For example, the labradoodle was reportedly bred to have the hypoallergenic coat of poodles — suitable for owners with allergies to fur and dander — but the temperament of a Labrador that makes the suitable for use as service dogs.

The first service labradoodle was bred by one Wally Conron, who introduced the breed while working for the Royal Guide Dog Association of Australia — now known as Guide Dogs Victoria — in 1989.

They found that changes in very few genes are capable of defining a new breed — and that many labradoodles also feature small numbers of spaniel genes as well. Pictured, actress Jamie Lee Curtis and her labradoodle

Among the celebs known to have adopted labradoodles — adding to their popularity — are actress Jennifer Aniston, golfer Tiger Woods and TV presenter Graham Norton, pictured

A dog from his first litter of labradoodles — named Sultan — went on to act as service dog for a woman in Hawaii whose husband was allergic to long-haired dogs, and whose request for Mr Conroy’s help has prompted the breeding effort.

However, controversy surrounds the suggestion that Mr Conroy bred the first-ever labradoodle — with British speed record breaker Donald Campbell said to have used the term in a 1955 book to his describe his Labrador–poodle cross, Maxie.

Regardless, Mr Conroy has gone on to express regret that he created the breed, citing how their popularity combined with poor breeding practices has led to many of the crossbred animals having health issues.

The finding of the new study may help inform the development of genetic tests that could be added into breeding programs to mitigate such problems — which can include joint conditions of the elbow and hip, and congenital eye diseases.

One of the most coveted and recognisable dogs, the labradoodle, may actually be a ‘monster,’ says the breed’s alleged progenitor.

According to Wally Conron, an Australia native is often said to be the first person to breed the labradoodle —a cross between a poodle and a Labrador —the dog opened up a ‘Pandora’s Box.’

‘I bred the labradoodle for a blind lady whose husband was allergic to dog hair,’ Conron told Australia Broadcast Network.

‘She wanted to know if we could come up with a dog that she could use as a guide dog and her husband wouldn’t be allergic to.’

The issue, says Conron, who was working for the Royal Guide Dogs Association of Australia at the time, was not in finding a breed less harsh on one’s allergies, but was finding one that was hypoallergenic and had the right temperament.

Poodles, though they met the shedding criteria, didn’t quite have the same friendliness factor as Labradors, so Conron decided to mix the two.

After nine weeks, Conron successfully brought his first-ever Labradoodle pups into existence and just like he expected, the dogs were mostly hypoallergenic like poodles and amiable like Labradors.

What Conron didn’t know, however, was that his attempts to publicise the breed would rocket his creation into an international phenomenon.

Following a six-month period of unsuccessfully trying to convince organisations to use the labradoodle as a service dog, Conron said he turned to the Royal Guide Dog’s Association PR department.

After his organisation released information to the press, the labradoodle officially took off.

‘I could not visualise the publicity that a crossbred dog would get,’ Conron told ABC.

‘Cars would stop and people would get out of the car and say to me: ‘Excuse me, what sort of dog is that?’ I’d say “it’s a labradoodle!” ‘

From there, Conron said he received interest from breeders and other hobbyists who quickly latched onto the dog’s characteristic coat and temperament and began to create versions of their own.

‘I realised the reason for these unethical, ruthless people [was] to breed these dogs and sell them for big bucks,’ Conron told ABC, adding that his intention was always to breed the healthiest dogs.

‘I opened a Pandora’s box and released a Frankenstein’s monster… When I’m out and I see these labradoodles I can’t help myself, I go over them in my mind.’

Popularity and loose adherence to breeding practices have worked to undermine the breed’s health, he says.

‘I find that the biggest majority are either crazy or have a hereditary problem. I do see some damn nice labradoodles but they’re few and far between,’ Conron told ABC.