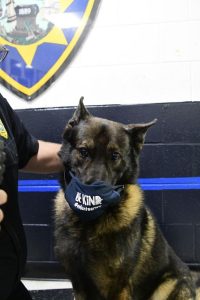 Police K-9s are mostly known for sniffing out narcotics and tracking down suspects or missing persons, but Bluefield’s K-9s are making time for public health promotions and birthday party appearances.

Bluefield Police Department K-9 Thor recently did his part against the COVID-19 pandemic by doing what many humans don’t like to do: Put on a mask.

Both federal and state authorities are urging the public to use masks, so Thor demonstrated the right away and the wrong ways to wear one. The photos were posted on the department’s Facebook page.

“I think Kevin (Fleming) had seen it somewhere with some other program. We thought it would be a good idea with our Explorers Program,” said Thor’s handler Lt. B.W. Copenhaver.

Children are more likely to heed Thor and his fellow K-9s than adults when it comes to advice about health issues such as wearing masks.

“They do, hands down,” Copenhaver said.

When K-9 units started working the department again, one goal was to have them doing more than traditional police dog duties.

“I think the biggest thing is whenever we reinstated the (K-9) unit, we wanted to make it more than things like the eradication of narcotics,” Copenhaver recalled. “I wanted us to be involved more with the schools and the community. That’s why we wanted to do more festivals, the ball games, things like that.”

Before the COVID-19 pandemic curtailed many public events, Thor, Gregor, Ace and Maverick frequently attended fairs and sporting events, sometimes wearing equipment such as special goggles and boots that help protect them during searches and pursuits in heavy brush and other environments which could injure them. The K-9s have proven to be a good way to start conversations with the public and encourage them to ask questions. Children especially like Thor and his colleagues.

“We want to educate the kids on the service dogs,” Copenhaver said. “One of the things we do is teach kids not to pet a service dog or any dog unless you have permission from the owner.”

Copenhaver said when Thor started duty, one goal was to use him to help educate the public.

“I can’t even tell you all of the things he has done. He’s even been to birthday parties,” he stated.

Copenhaver and other officers were eating lunch one day when a woman came over and asked if Thor could come to her son’s birthday party. The other dogs have visited birthday parties, too.

Thor recently performed some public service when a series of pictures appeared on the police department’s Facebook page. He demonstrated the right and the wrong ways to wear face coverings or masks.

Like many humans, Thor doesn’t care for masks, but after several attempts and plenty of coaxing, he did his part to help protect the public’s health.

“He’s been phenomenal for us. He really works well in the community,” Copenhaver said.

Thor and the other K-9s have played a big role in the department’s Explorer Program which offers fun activities and education to local children. The program saw its largest attendance when more than 20 children attended a session at Tiffany Manor before the COVID-19 pandemic made public gatherings hazardous.

“It’s been a great experience,” Copenhaver said of the Explorers Program. “There’s no question about that.”

And the pandemic won’t shut down the dogs’ public service duty. One future activity will feature K-9 officers reading books aloud with their dogs and posting videos for children.

“We hated it when COVID-19 hit,” Copenhaver stated, “But we won’t let it stop us or slow us down.”