Is Your Pet Stressed During Pandemic 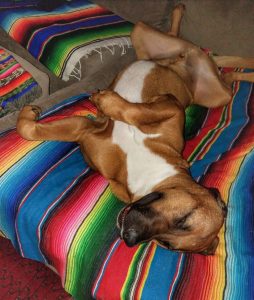 To the surprise of no one, most dogs seemed to relish the first few weeks of their humans’ staying home. More walks, more attention, more fun—what’s not to like? But veterinarians report an uptick in injuries from dog-to-dog bites, and owners who’ve walked their dogs regularly are dealing with an invasion of “new” dogs and people on their usual routes. Many of those “new” dogs have been walked rarely, if ever, and they’re not only untrained, they’re also under-socialized . . . so it’s a challenge! Certainly, if walking your dog has become unpleasant lately for both you and for the dog, it makes sense to reconsider your options, at least for as long as the stay-at-home lasts. Would there be some place a little farther away that might be safer for you to walk? Do you have the time to drive there? You might reconnoiter a route without your dog first. Even in your own neighborhood, reassess where you walk to avoid areas where owners and dogs congregate, like the informal dog park—especially if owners there take their dogs off-leash in an area that’s legally on-leash only. Those dogs and their owners are strangers to you and your dog. Keep it that way, for the safety of all concerned.

Mark Cuilla(Washington) Let me know when you do a “Are you stressed by your pets during the stay-at-home order?” Francine (one-year-old cat) has been jumping onto the counters and to the top of the fridge and seems to be “acting out.” She has never done this before. I’m working from home and, during the day, she clings to me. I can’t go from one room to another without her under my feet. She’s broken a porcelain figurine and a glass, and is constantly getting into the bathroom garbage to steal things.

I’ve given her and the other cats new toys to play with, but I can’t seem to keep her busy. It definitely seems like a stress response of some kind.

I found out yesterday we won’t be returning to work until at least mid-September.

For cats as young as Francine, instituting a completely different work and living schedule overnight, for what is the first time in their lives, certainly could be stressful. It’s a big change!

Older pets have experienced change in their lives before and possibly that will help them during this new lifestyle upheaval, however long it lasts.

Older pets may also have some established behaviors that have not been major issues—until now. It can take some thought and creativity on the part of their owners to figure out the problem and to devise a solution. When that solution works, it’s a win!

Teri and James Stripes(Washington) are both working from home for the duration. They have two boxers, Max and Amy, eight years old. Increased foot traffic at their front door from grocery and package deliveries resulted in a work-at-home problem for Teri and James, as their dogs’ reaction—more frequent barking and growing agitation—was not good for the dogs or for the humans.

Their solution? Get the deliveries as far from the front door as possible.

How? Teri and James bought a lockbox, which they installed securely next to their garage at their end of their driveway, where it is screwed into the concrete, a long way from the front door. When they place orders, they now include the location of the lockbox and a code. When deliveries arrive, the drivers use the code to open the lockbox to deposit the packages in it. When the driver closes the lid, the box is again locked.

The result for the Stripes’ dogs is greatly reduced agitation. They only rarely alert to delivery trucks on the street, and no deliveries are arriving at their front door! The result for Teri and James is a much better chance that boxer barking and agitated behavior will not occur during live video conferences. The humans are feeling very good about figuring out the problem and finding a solution.

What about working dogs? Service dogs, usually out and about with their handlers, are now on a stay-at-home, too, and guess what? Working dogs get bored fairly easily when they have little to do! Jules Weber’s solutions for her service dog Pretzel would very likely work well for any dog experiencing boredom because he can’t do the whole job he’s been trained for right now.

Jules Weber(Maryland) Zero stress from any of our fuzzies (two dogs and two cats). However, my main “thing” is keeping up with my service dog’s training. Because he’s SO BORED! His official name is SSD Pretzel Rod, but we just call him Pretzel. He just had a birthday in April so he’s four. Yellow Lab.

We take walks around the driveway (his main tasks are balance and brace work). We do shaping exercises via clicker training, we have cuddle sessions in bed (so it’s easier for me to pet him), my husband runs around the house and plays with him, our other dog plays with him, and to the best of his ability—although it seldom works—Pretzel tries to play with the cats. And then there are the zoomies, where he picks up a toy and runs full Labrador speed around the house and shows everyone the toy (usually squeaking it constantly, LOL). He’s still on his regular schedule of eating meals and going out. And for the most part he can self-entertain, but because we are not doing anything anywhere, the moment I saw a hint of boredom, we supplemented.